UNION – The lieutenant governor candidates – in their only debate before the November election –  symbolized their running mates’ platforms Friday night.

Challenger Milly Silva hammered at the 400,000 people still out of work, criticized the administration’s opposition to a hike in the minimum wage tied to a cost-of-living increase, and ripped Christie’s opposition to what the Democrats believe is a fair funding formula for schools.

On the minimum wage increase, Guadagno pointed out that Christie supported a hike that would be phased in – not enacted all at once – and not linked to a cost of living provision.

Guadagno, secretary of state and the first LG in the state’s history, hammered at what the Christie administration has done in nearly four years, emphasizing their oft-repeated mantra that they reversed the trend of tax increases under former Gov. Jon Corzine.

Silva, a standard bearer for organized labor, emphasized the idea that the Christie administration, having vetoed the minimum wage hike legislation, for instance, is experiencing a disconnect with working men and women.

Silva also sought to portray herself as a role model. “Maybe, like me, you’re a parent worried about the disparity” in pay.

“We need to expose the man behind the curtain,’’ she said of the governor.

Guadagno was not to be put off by that.  She pointed to her experience in the public sector as a federal prosecutor and a sheriff. She became the first-term point person for Christie in dealing with business, and oversaw a commission to cut red tape and reduce regulations.

She portrayed the election between Christie and Sen. Barbara Buono as a clear choice.  “Do we want to go back to where we were in 2009 with high taxes,’’ she asked.

“We needed people to know that we were open for business,’’ Guadagno said of her work in reducing burdensome regulations.

They sparred over issues that have been talking points for months on the campaign trail: the millions spent on a special U.S. Senate election, for instance.  Buono and Silva wanted the Senate election held on the same day as the general election.

Guadagno denied anyone is being disenfranchised, and said thousands already have voted as early provisions permit them to.

The pace of recovery from Superstorm Sandy was another issue, with Silva targeting the NJ Transit trains that were underwater because of not being moved to higher ground prior to the storm hitting last year.

“When you have trains that were left in the swamp and you blame a mid-level manager, you’re not really taking responsibility,” Silva said in reference to the recent revelation from the administration that seemed designed – according to critics – to absolve higher-ups of culpability.

Guadagno defended her boss and the national-level leadership he displayed in working to bring New Jersey back from one of the worst natural disasters it has ever suffered.

They jousted over education funding.

“You have to stop just throwing money at school districts and hope it gets to the children,’’ Guadagno said, plugging the Opportunity Scholarship Act, a pilot to provide scholarships for low-income students to attend out-of-district schools.

Silva touted the Democrats’ platform of ensuring less affluent urban districts are funded fairly, which means giving some of them more money than more affluent suburban districts because they are starting off so far behind others.

On one of the hottest topics, gay marriage, which the state Supreme Court just today said it would take up, Guadagno reiterated Christie’s long-held belief that neither the courts nor the Legislature should be making this decision.

“Let the people decide,” Guadagno said in calling for a referendum.

Silva espoused Buono’s support of the advancement of the cause as an equal rights issue. 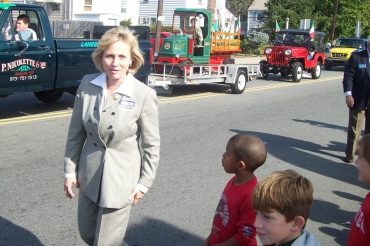