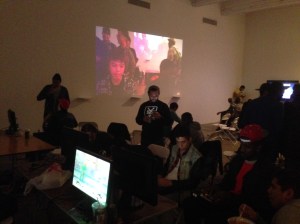 Late Saturday afternoon, Chelsea’s setting sun had turned the windows of Zach Feuer to mirrors and, past the racks of fake video games at the entrance, the gallery had undergone a transformation too. Aggressive clusters of young men shit-talked each other over hip-hop from a DJ booth at the back of the room. Some of them ate Haitian food from tin containers on folding chairs, engaged in nodding discussions serious enough to discourage the gallery types from taking a seat nearby—they tended to hang near the walls.

Someone had written the names of matches on a wall in marker and rowdier participants called out side bets, slapping cash on a table with a projector—”Who wants to take 50 right here?” “I’ll take 50!”—which lent the feeling of an underground fight club, or perhaps a cock fight.

In fact, the digital thugs were betting on an invitational tournament for the video game Street Fighter IV, the main rounds of which were projected against a single wall while other players with lap-straddling arcade controllers played exhibition matches on monitors around the room.

“Almost can’t tell you’re not at Frieze, eh?” Mr. Feuer said, walking to the front desk to replenish the beer.

The artist Jon Rafman had organized the tournament in conjunction with his video game-y show at the gallery, “You Are Standing in An Open Field,” in an effort to capture the spirit of the Chinatown Fair, the legendary arcade that closed in 2011 and left, as The New York Times put it, a “diaspora wandering in the desert, looking for a home.”

Mr. Rafman got to know Chinatown Fair’s denizens while shooting Codes of Honor, a documentary piece from the same year the arcade closed. He became fascinated with the subculture—the kid who once had a gun pulled on him for the audacity of his Mortal Kombat play style, its heroes like Eddie Lee who “like Bobby Fischer disappeared at the height of his career,” its terminology (“Pringles” for defenses that are easily broken), its development of a regional technique, in fighting games such as these, like the Turtle, or Zone, defensive strategy.

Though the film started off as a celebration of Otaku culture, he said, he soon wanted to elevate the status of “the passion these players have.

“I see it as pure,” he said. “These games, because they’re products of capitalism, are built to be enjoyed in an absolute way, so the players use every element available to them, much the way an a professional athlete will.”

Which led to matches that were enjoyable, or at least GIF-worthy, in the way professional sports are. It wasn’t only about knowing all the joystick patterns for the cool particulate-laden moves of this game (its full title Super Street Fighter IV: Arcade Edition, a third iteration that followed Super Street Fighter IV), because a player also has to know how his moves will meet his opponent’s. In one match at Feuer, the yoga master Dhalsim burped an absurdly large fireball at the boss character Seth. “Teleport! Teleport!” shouted the crowd, though Seth’s player, PIE Sci of the PIE clan, had already entered the move and Seth’s hairless albino form shifted in a blue blur to the other side of Dhalsim. Proving he was still quicker, Dhalsim’s operator, Bryheem, then grabbed Seth and threw him back in the direction of the fireball, missing it  by millimeters as it moved off screen. These were the sorts of games where someone could pull off a 26-hit combo (“Marvelous!” cooed the game) and still lose.

A pair of commentators streamed the main screen matches for fans online so the pros fought in a white room not so different from the gallery, rather than in one of the more elaborate stages—like the jungles with animated animals, or construction sites—which yield busier screens and streaming difficulties. Between rounds the screen would cut to the real-life combatants, who would usually wipe a brow or exhale.

Some of the more heated fights, Mr. Rafman said, were the culmination of Facebook smack talk, which was how the subculture started in the first place. (Who’s the best Ken in the city? The best Ryu?) One game between two players still in their teens, Patrick Lee, a k a DeFeetLee and PIE Smug, had everyone on their feet since Mr. Lee had selected the beret-wearing pixie Cammy as his character, while Smug had chosen the natty boxer Dudley for his. A few days before, a closely watched French player named Alioune, a world champion, had placed Cammy at the top of a new ranking matrix, with Dudley at the very bottom. Despite this, it was a close game, with money and shouts exchanged until the end, and the cheers of clan PIE may have helped push Smug to his eventual victory.

“I know what went wrong,” Mr. Lee said after the match. “I went in thinking Cammy was the best.” As with any sport, hubris rarely pays off in Street Fighter.

A guy from the sidelines with a backpack joined the conversation. “No, man, I know what you did wrong,” he told Mr. Lee. “Every time you blocked a move you tried to go for a throw. Every. Time.”

Smug (whose real name I didn’t catch) joined the conversation and both congratulated each other on a good game. If Dudley had been so poorly ranked, why had he chosen him?

In all, the evening fit well with the rest of Mr. Rafman’s show, which features Japanese love pillows and videos of gamers who tape long play throughs on games that don’t even involve much skill, like Resident Evil and Skyrim. Rankings like Alioune’s matter to the groups like the one at the gallery Saturday because they acknowledge the “planned obsolesce” of games, Mr. Rafman said. With new version and software updates, your skills may become useless.

“You know the new update’s coming in three days, right?” said a bystander listening in.