I was working at a luxury lifestyle magazine when the Red Rooster opened in January 2011 on Lenox and 125th. Soon after, the magazine’s editor, a small orange jabberwocky besotted with wealth, burst into my cubicle in a state of extreme excitement. “I’m obsessed. Completely obsessed,” he said in a marble-mouthed grumble. ��Finally, a reason to go to Harlem. I love it!”

Wiping a fleck of spittle from his mouth, but leaving some on my desk, he immediately commissioned a feature on the place, farted and left. “There is no hotter reservation in town than at Red Rooster,” the piece read when it came out a few months later, “a heady, heterogeneous and happening mix of ‘the New Yorker, the Harlemite and the visitor.’”

I disliked the Red Rooster then, and I dislike it now. Red Rooster’s chef, Marcus Samuelsson, is talented, and his meatballs are boss. So, frankly, I’m not even sure the fault lies with him. But there is something in the self-congratulatory transgressive glee felt by the legion of fancy Midtown folk, like my former boss and his monied cronies, who crossed over 125th in Lincoln Town Cars as if it were the River Styx to eat $27 fried chicken, that is gross. It’s like the OMG Brooklyn thing but with the race grenade thrown in. For under the subterfuge of his neighborly do-gooder speak, what Mr. Samuelsson did and is doing, whether it is or is not his intention, is exploiting Harlem, dressing it up real pretty-like, tying it up in a neat post-racial bundle and leaving it to be discovered by yuppies on safari.

I walked by the Red Rooster the other night on my way to the Cecil, a new and tremendously exciting restaurant on 118th and St. Nicholas. The half-empty Rooster wasn’t crowing, and it was neither heterogenous nor happening. The Town Cars were gone, but tourists in thin-soled Euro sneakers streamed from the 4/5/6 station, maps in one hand and Zagats in the other. I continued southeast, past braiding salons, international call centers and a clothing store called Lazarus, which I hope is a New Testament play on Toys ”R” Us. (These prices will rise again!)

The Cecil is not on a hot block: The only other tenant on that stretch of St. Nicks is a senior center. The restaurant opened in September on the ground floor of what was once the historic Cecil Hotel but is now Section 8 housing. Its chef, Alexander Smalls, is similarly not hot, unless one is conversant in antediluvian New York dining history. In 1994, Mr. Smalls, a former opera singer-turned-chef, opened Café Beulah, a haute low-country restaurant to generally positive reviews, but he has largely been absent the culinary scene since its closing in 1997. This isn’t to say the Cecil isn’t major. The moneyman is Richard Parsons, former CEO of Time Warner, and Messrs. Smalls and Parsons also own Minton’s Playhouse, the old jazz club adjacent to the Cecil, which they plan to reopen this month as Minton’s. No expense has been spared on either project. The two are clearly up to something big on 118th Street.

One indicator of the pair’s grand ambitions is the size of the Cecil. It’s massive, much larger than the 140 seats require and divided into a spacious front bar and a cavernous back dining room. Though one wall is storefront windows, the space still struggles with light. It’s all shades of black and brown—mahogany tables, licorice banquettes, charcoal fabric wallpaper and ebony finishes, which makes sense in the context of what’s to come but does not feel joyful or lively. Much less sobersided is the menu—stately but also perplexing and exciting.

Mr. Smalls describes it as “Afro-Asian-American,” which sounds like cockamamy opportunistic fusion until you think about the scope of the African diaspora, the largest forced migration in human history. Mr. Smalls’s mission here is to showcase, as he puts it, “the influence of the African diaspora on the cuisines of the world.” Shades of brown: good for food, less good for decor.

That the restaurant asks you to think at all is exciting. Even better, it rewards the thought by opening up a complementary universe of far-out flavor constellations, a panoply of beans, gumbos of extreme complexity, yassas of edifying creativity, eddies of spice in swirling stews, suyas of edible derring-do and a goddamned great macaroni-and-cheese casserole.

During Mr. Smalls’s hiatus from commercial kitchens, he has written, researched and traveled to the far-flung corners of the African diaspora, sniffing pots and lifting lids. He’s a chef-scholar-nomad-singer, the Henry Louis Gates of the African kitchen. At the Cecil, he mounts his argument, one plate at a time, that wheresoever there were slaves, there was African cooking, and just as revisionist as it is to whitewash the former, it is equally foolish to overlook the latter.

He makes his arguments in three ways. The first is to include foods from whatever port the slave ships landed, a dismayingly long list that includes China, under the Song Dynasty, India (and thus, the West Indies) and, of course, scores of low-country harbors like Savannah, Ga., and Charleston, S.C., from whose suburbs Mr. Smalls comes. This explains why there’s an entire section devoted to choose-your-protein rice bowls ($16-$24), a Skuna Bay house-cured salmon summer roll ($13) and a Brazilian feijoada ($40).

The results are mixed. The feijoada, a traditional Brazilian meat-and-bean stew, is rarified and internationalized with the addition of lamb merguez and oxtail, much to its benefit. Mr. Smalls resurrects some of his Café Beulah favorites with the skill and happy result of Lazarus. His mac-and-cheese casserole ($20) is one such gonzo cheesy hammy holdover—manna for the decadent, hell for the lactose intolerant. A low-country gumbo is a paean to the Holy Trinity (celery, bell pepper and onion) and the power of a good roux. But the summer roll, whose lettuce skin was properly tender and salmon silky, feels like a non sequitur. And that wok section exerted just about as much pull over me as a poker machine at a titty bar.

Mr. Smalls’s second, more successful tact is to braid together non-African dishes with African ingredients and vice versa. Hence the Chinese long beans that accompany the pleasantly plump poussin yassa ($24)—yassa is a type of Senegalese marinated poultry dish—and the dumpling skins that enwrap the melting oxtail dumplings ($12), an appetizer topped with a bright apple curry sauce and thin slices of crispy taro root. Both work beautifully. Or take Mr. Smalls’s smart take on fried chicken, a cinnamon-scented fried guinea hen, a crisp thigh and breast atop charred okra and Asian red beans and a frisee salad ($27). The plate illustrates what’s best about the Cecil: It recognizes the heritage from whence it came as a living one, capable of nuance and complexity. Oh, and it’s also delicious.

This second approach is much more convincing than the first, since all these mixed marriages seem happy ones, especially when it involves beans—azuki, long, black-eyed—with which Mr. Smalls has an especially sure hand, or okra, which comes variously charred, fried or stewed but always minimally slimy and maximally delicious.

The final argument Mr. Smalls makes is the ballsiest. The menu at the Cecil is strange, shambolic and almost schizophrenic. Crammed with ragtag international entries, it seems nonsensical, all “brillig and the slithy toves … in the mome raths.” For some folks, allergic to thought, that’ll be all they see. That’s fine, but I pity the fools.

For there is a way to unlock the code of the Cecil. That is, to think of the restaurant’s menu through the scope and the depth of the African diaspora—something that was as wild as the wind, was sinister and strange and schizophrenic. Consciousness is your enigma machine: Contemplate the insanity of it sanely. Not easy to digest, nor prepackaged with a side of collards and a coxcomb, the Cecil doesn’t offer comfort food; it offers food for thought. It’s the anti-Red Rooster, and that’s something to crow about. 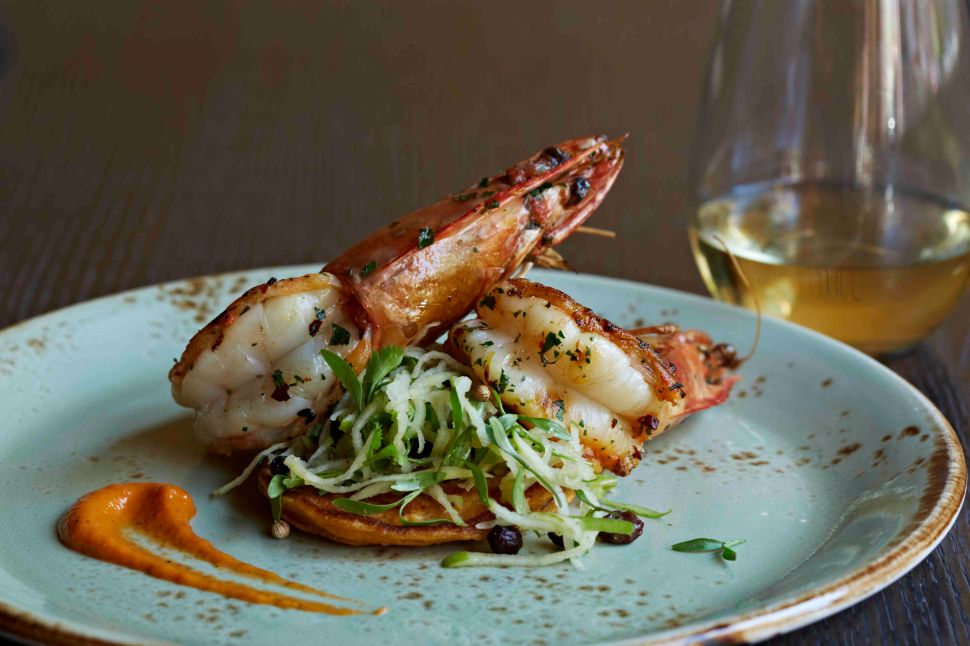