The Atelier desperately wants to be a trophy tower.

You have to hand it to the Atelier—the silvery tower at 635 West 42nd Street might lack the old-world elegance of 15 Central Park West, the prestige of 740 Park or the stratospheric closing prices of Superior Ink, but it’s certainly determined to play in the same league as the city’s most sought-after addresses.

Despite a building sales record that tops out at $2.11 million, the condo tower is once again trying to lure the city’s mythical hordes of trophy hunters, this time with a $25 million triplex spanning the 24th, 25th and 26th floors. Which may seem like a steal compared to the $85 million ten bedroom on the 45th floor, but is still twelve times what anyone else has paid for a unit in the building.

We’re dubious that a Midtown West building with a modest sales history can bag the really big-time buyers, but if the Atelier fails, it won’t be for lack of trying. Besides the 45th floor unit and the triplex combo, several other doozys have also hit the market in the last few years, among them a $14 million eleven bedroom and a $12 million seven bedroom. The $25 million spread is a combination of six different units, according to River2River Realty listing broker Dan Neiditch, and though the units have not yet been combined, he assured us that the construction costs were included in the staggering sales price. (The other would-be trophies are similarly… unpolished.) Once completed, according to the plans, which are also still in the works, the unit would have eight bedrooms and 8.5-baths spread out over 6,800-square-feet.

“It would have unobstructed views of the river and the city,” boasted Mr. Neiditch, adding that when you combine units you can almost double the price per square foot—the famous one plus one equals two-and-a-half rule of apartment combos.

And while the $85 million floor-through has yet to sell after hitting the market six months ago, Mr. Neiditch assured us that there was strong interest: “we’ve had some nice offers for it in the low $50 million range.”

It remains to be seen whether those with hundreds of millions to be spend will be willing to swim in the skylit pool or lounge on the rooftop terrace with neighbors who have only a few million to their name. While all buildings have a range of prices, few have such a vast range. To wit, one can still, at this very moment, scoop up a two-bedroom on the 38th floor for only $1.9 million.

Moreover, unlike One57 or 432 Park, which can at least provide drool-worthy renderings and floorplans, the Atelier’s trophies must rely solely on the imaginations of potential buyers, though at least buyers can check out the unfinished spaces without donning a hard hat. It also has the added benefit of being New York’s sexiest condo tower.

But perhaps the biggest challenge the building will face when it comes to drawing deep-pocketed Russian billionaires is its location. Hell’s Kitchen, or Midtown West, is still more up-and-coming more than arrived, though it certainly has some luxury residence company in the form of MiMA, the newly opened Gotham West and maybe, someday soon, its long-stalled sister tower, the Atelier II.

Though on the bright side, unlike the spate of trophy towers on 57th Street, the Atelier doesn’t have very much local condo competition.

“Both MiMA and Gotham are rentals,” Mr. Neiditch said. “And there are really no other condos on the water between the 20s and the 60s right now.” 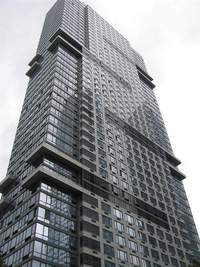