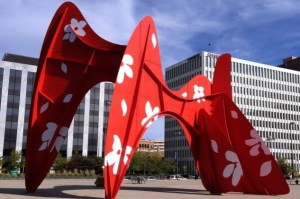 The work in question. (Courtesy ArtPrize)

In a letter to the city, the artist’s grandson Alexander S.C. Rower called the work an “abomination” that “reflects an utter lack of understanding and respect of Calder’s genius.”

“I didn’t hijack his work,” Mr. Dodde told MLive/Grand Rapids Press. “I simply used it to define the lines of his own work differently and to define my own work on top of it. Both of them draw attention to our city’s icon, to this treasure that we have in the heart of downtown Grand Rapids.”

The Los Angeles Times notes that the sculpture has been covered in decals before, to promote things like breast cancer awareness.

Curiously, the town’s municipal government prompted this reaction when it reached out to the Calder Foundation for an opinion of the work. Maybe they were hoping Mr. Rower would say “it’s fine, it’s goofy, whatever.”

The full correspondence between those entities follows.

I am contacting you on behalf of the City of Grand Rapids, Michigan. As you are no doubt aware, Alexander Calder’s “La Grande Vitesse” has graced the Calder Plaza in our City for more than 40 years. It has become an iconic image representing our City, and is much beloved by our residents.

I am hoping that you may also be familiar with the Grand Rapids ArtPrize event, held annually in Grand Rapids since 2009. ArtPrize has gained national attention, and was designated this year as one of Time Magazine’s “Top 5 Events You Won’t Want to Miss in 2013”. We are extremely proud to host ArtPrize, and we cannot overstate the positive impact it has had on our community. This year’s event opened on September 18th, and includes more than 1,500 artists exhibiting their work at hundreds of indoor and outdoor venues throughout the City. More than half a million visitors are expected to visit our City in the next two weeks.

Specifically, I am contacting you because several of our citizens have expressed concern to City leaders about an exhibit that has been erected on the Calder Plaza in conjunction with La Grande Vitesse. After much discussion among City staff and officials, we are turning to the Calder Foundation for input and direction. I have attached a photo of an installment called “Fleurs et Riviere” by David Dodde. Mr. Dodde is a local artist who has manufactured foam core flower petals, which have been attached to the La Grande Vitesse by magnets. This temporary installation is sponsored and managed by the non-profit corporation ArtPrize Grand Rapids, which has engaged local artist Richard App to curate the Calder Plaza venue.

The City generally does not regulate or restrict ArtPrize exhibits, beyond that deemed necessary for public safety. The purpose of the event is to spur discussion about art among members of the public. To that extent, Mr. Dodde’s installation has been somewhat successful. There is much debate in our local media about what is art, and what is not, as it relates to his work. We wish to be perfectly clear however, that if the Calder Foundation views the work as inappropriate, the City of Grand Rapids does not intend to allow this temporary installation to diminish a valued partnership built over forty years. We are seeking your collective opinion about this installation, and asking what action, if any, the Foundation would wish for the City of Grand Rapids to take in response to Mr. Dodde’s installation. I have copied the City Manager, Deputy City Manager, and Mayor on this correspondence.

Please review the attached photo, and contact me at your earliest opportunity. Thank you.

And here’s the second:

I am not surprised to hear from you, as we too have received dozens of messages surrounding this controversy.

The history of art has been enriched on multiple occasions by temporary interventions or responses to masterpieces by fellow artists; however, its success rests on the intellectual rigor of the dialogue and the intervener’s deep understanding of the original work. I regret that neither applies to this unfortunate example.

The addition of poorly rendered imitation Warhol flowers to Calder’s magnificent La Grande Vitesse contributes nothing to humanity’s understanding of Calder, Warhol, or the role of public art. The public “discussion” surrounding this abomination, which you mention as an element of the project’s success, fails to address these issues.

We had chosen to remain silent about this provincial happenstance, as the initiative is luckily temporary and reflects an utter lack of understanding and respect of Calder’s genius.