HIGHLANDS – Both of the main mayoral candidates in this 5,000-person Monmouth County borough were front and center when Hurricane Sandy slammed into the Bayshore a year ago. Republican incumbent Frank Nolan and his challenger, Democratic Council President Rebecca Kane, roamed up and down Bay Avenue, trying to restore their destroyed piece of the shore in their capacities as mayor and fire department member, respectively.

While both Nolan and Kane are united in their desire to help Highlands fully recover, they are divided in their approach to solving the borough’s problems. They are also split by party politics that have put the Monmouth municipality in play on the partisan chessboard for county control.

Nolan was voted in as mayor three years ago and presided over Highlands when it was hit by both Hurricanes Irene and Sandy. A proposed plan to raise Highlands’ downtown 10 feet to permanently abate surging seas, storm damage and flooding brought national attention to the borough, but Nolan’s current recovery plan is more centered upon flood mitigation and sewer upgrades.

“We bonded for $4.5 million for a flood mitigation project already, and we’re hoping to get 75 percent of that back from FEMA because we’re in line for that project,” said Nolan, 43, who runs a car dealership. “That will add more pump stations and add more and better drainage. The secondary plan is to do a direct drain from the Route 36 area and take that right into the [Shrewsbury] River.”

Kane agrees that flood mitigation plans and stronger sewers are needed to attract both year-round and summer residents back to Highlands. Her reservations are in regards to how her small town will pay for the plans, and what Nolan’s plans for Highlands ultimately entail.

“As much as we need a borough hall, which was wiped out by Sandy, we need a level of safety and security for the residents,” Kane, 36, a contracts manager for a telecommunications firm, said. “We flood from the inside out – it comes up from our sewer drains and we don’t have huge waves that take us over like Union Beach and Mantoloking. I’m a little more conservative. We’ve already bonded for more than $4 million, and we should try to roll out the next phases of our recovery using grants from federal, state and any other source possible. We have to be financially responsible, or else our taxpayers aren’t going to be able to afford to live here.”

Kane also pointed to a recently defeated zoning ordinance that would have allowed 10-story buildings in Highlands as a concern.

“The mayor is very pro-development, and is for big development,” Kane said. “The mayor voted yes on the ordinance, but most of the people in this town want to keep this town on the small scale as much as possible.”

Nolan and Kane made their comments about Highlands’ future on Thursday, the same day Cory Booker took the next step on his political future when he was sworn in as a U.S. Senator.

Monmouth County Democratic officials indicated that Booker had recorded a robocall for Kane that will be deployed before Election Day on Nov. 5.

“I think it’s wonderful that Cory Booker is paying it forward and helping me get elected,” Kane said. “Our election has been anything but normal this year, especially post-Sandy. I hope his support will continue for our small Bayshore town for years to come.”

But Nolan was less than impressed with Booker’s first Senatorial foray into Monmouth politics.

“We can be totally different from the national and state scene – it has little to do with outside influence here,” Nolan said. “I’m a moderate Republican trying to get help from anyone I can – Democrat, Republican, independent or Martian. Highlands people are going to elect who they think can do the job, and they don’t just vote down the line for anybody. I’m not freaked out by Cory Booker.”

“Frank Nolan demonstrated tremendous leadership during the storm not as a Republican, but as the mayor,” Bennett said. “He did what was necessary to keep a devastated community focused and moving ahead, and he has continued to do that this past year.”

But Monmouth County Democratic Chairman Vin Gopal saw Booker’s involvement as a sign that the winds of change are about to blow through the Bayshore.

“The Bayshore is a community of working-class people, and currently most of these towns are represented by Republicans. There is no reason why towns like Highlands, Union Beach and Keansburg should be run by Republicans that align themselves with Tea Party Republicans like Steve Lonegan and [former Highlands mayor and 6th Congressional District candidate] Anna Little. The Democratic Party is now providing quality, alternative choices to Republican establishment candidates. Becky Kane is young and energetic, and she can unite Highlands and move it forward.” 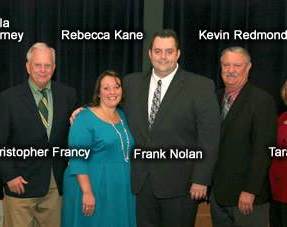