JERSEY CITY – Hudson Democrats tonight tried to sell themselves as the rightful power base of the party, falling in behind state Sen. Nick Sacco (D-32) of North Bergen.

They don’t appear to care about whether or not their power is on full display on Nov. 5th.

When Sacco arrived at the Casino in the Park he saw Jersey City Mayor Steven Fulop with his nose pressed against the window.

“Mayor, you won the election,” Sacco reminded Fulop, and welcomed him to this autumn food and political fun fest stocked with all the disparate personalities of this one time Hague-dominant county turned creaky picture of political schizophrenia.

Fulop defeated Jerry Healy in May and now Hudson pols think they have a star.

“The fact is we have a mayor of Jersey City who is standing out on the state level already,” Sacco told the crowd of over 500 people.  “He is automatically our standard bearer. The mayor of Jersey City is the person we all look to in Hudson County. It means a lot in terms of our prestige.”

He may run for governor in 2017, he just doesn’t publicly back one this year.

Neither does Hoboken Mayor Dawn Zimmer, who was also in the room.

Unfailingly the political pragmatist, Fulop stepped to the microphone with a kind word about Sacco’s organization and the man charged with running it countywide.

“The Hudson County Democratic Organization has gone through a lot of iterations,” said the mayor of Jersey City. “It takes a very special person to work toward a common goal. This person has been able to achieve that. Every municipality in the county has representation here tonight.”

Then he introduced “my friend,”  Sacco’s ticket-mate, and the chairman of the Hudson County Democratic Organization (HCDO), Assemblyman Vincent Prieto (D-32).

“He’s on his way hopefully to higher, higher office,” Sacco later said of the man insiders view as the successor to Speaker Sheila Oliver (D-34) of East Orange, who was also in the room tonight.

So was U.S. Senate candidate Cory Booker, the Democratic nominee.

Hudson County executive Tom DeGise took a crack at Booker’s opponent and Gov. Chris Christie in one stroke when he went to the head of the room.

“He espouses what we believe,” the executive said of Booker.  “The other guys got a Tea Party nut jub. We have to send a message out that will be heard next week.

“It should also be mentioned we have to do it next Wednesday at a cost of $24 million dollars to the state and $2 million to Hudson County because the governor didn’t want to run against Mayor Booker; it’s as simple as that,” DeGise added.

This event occurred while Christie and his Democratic opponent, state Sen. Barbara Buono (D-18), debated on a stage at William Paterson University.

But Hudson was into hearing about Hudson.

There was a plasma TV at the bar with the sound down. The channel it was on was not immediately clear, and when PolitickerNJ.com asked someone about the Democratic nominee, the reply was, “She’s up against a juggernaut.”

Sacco spelled out his focus, and it was hardly complicated.

An organization founded on patronage politics delighted in the ready supply of distant scapegoats on the other side of the aisle who shut down the federal government.

“They could not be here because the Tea Party has sequestered the government,” said the HCDO Chairman.

A supporter of Christie’s, state Sen. Brian P. Stack (D-33) was also not in attendance, but he dispatched a surrogate for the requisite hand wave. 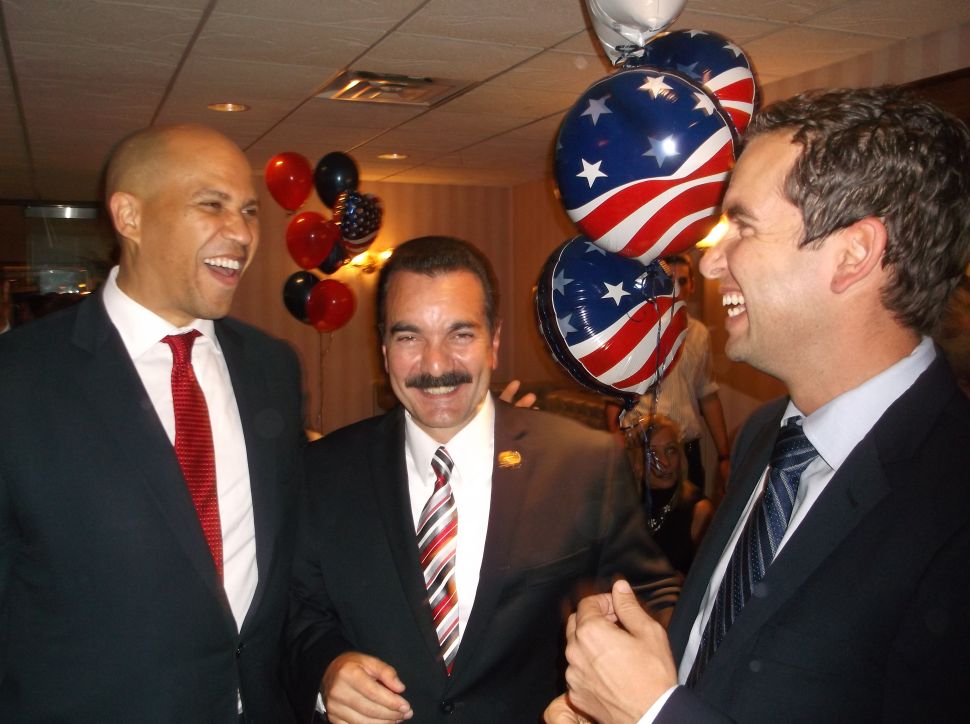