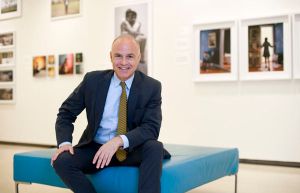 After a little more than a year serving as executive director of the International Center of Photography, Mark Robbins will be leaving to become president of the American Academy in Rome. The Times, which broke the news, writes that Mr. Robbins told them in an interview “that the lure of Rome had been too strong to resist.” Can’t blame him on that. His last day will be Nov. 15.

Before coming to ICP, Mr. Robbins had served as dean of Syracuse’s architecture school.