NEWARK – When they start naming things after you in this paranoid world of politics, not even very cynical people draw funereal conclusions about the careers of those esteemed honorees getting name-plated, bronzed or embossed.

Not so in this case, said Essex County Executive Joe DiVincenzo, who insisted the new conference room on the 14th floor of the Leroy Smith building downtown doesn’t mean the end of the leadership role of Speaker Sheila Oliver (D-34) of East Orange.

“It’s just the beginning of her career,” said the powerful albeit dinged and somewhat embattled county executive, who took another anvil-sized headline on the back this week when the Star-Ledger focused in on the possible improper distribution of federal funds by the county.

Neither the story – the Rev. Ron Christian of Irvington, scrutinized in the piece for his receipt of funds – delivered the event’s benediction – nor the internal optics of the Democratic Party statewide – appeared to derail at least a projection of strength here in a room where Oliver once sat on the 2011 redistricting commission.

“It would be a shame if she didn’t continue as speaker,” chimed East Orange Democratic Committee Chairman Leroy Jones.

Seated in the front row at Oliver’s shoulder at this event and given several well-timed and respectful shout-outs, notably by DiVincenzo, Assemblyman Vinny Prieto (D-32) of neighboring Hudson stands to succeed Oliver amid whispers of DiVIncenzo maybe having the nuclear option of summoning Republican support through his friend incumbent Gov. Chris Christie to return Oliver to the throne of lower house power.

Oliver doesn’t want to do it that way, she said.

“The great county of Hudson,” Payne intoned, then cracked in his next breath to laughs, “second only to Essex.”

The word is SJ is going with Prieto, straight over the heads of DiVincenzo and Oliver, but as if to say the game isn’t up, Senate President Steve Sweeney’s (D-3) district mate drove here from Gloucester County to honor Oliver.

Who do you support for Speaker, PolitickerNJ.com asked Assemblyman John Burizchelli (D-3) of Paulsboro.

“Sheila Oliver,” Burzichelli said without hesitation, “until she says otherwise. It’s too early.”

Prieto didn’t package his public remarks quite the same way, as he simply used his mike time to pay tribute to Oliver’s service.

“What a leader,” he said. “It’s a great honor to bestow this on her. Good luck and God bless her everyday.”

DiVincenzo swatted at the Ledger story – “Don’t believe everything you read in the paper” – then moments later, overcome by emotion, cried at the podium, as did Oliver, when he introduced her for the honor. 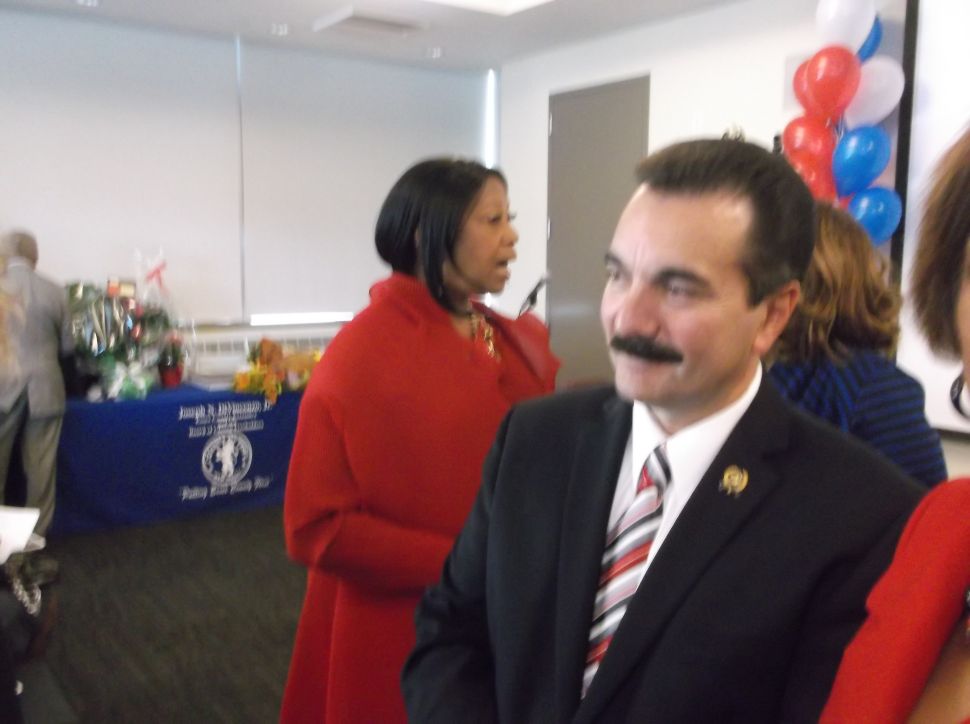