WESTVILLE  – One week out from the election, the Senate President – labeled an ouster target by the GOP – joined an assembly of national educational and labor leaders to address one of the state’s major problems: The fact many New Jersey students can’t afford to attend college in their home state.

Now he wants to help make it possible for N.J.’s future generations of young adults to attend those classes and use those labs.

National education and state labor leaders came to battleground LD 3 Monday to call for creation of a commission to conduct an in-depth, one-year study into college affordability and recommend programs to help New Jersey students.

The issue was personified by third-year Rowan University political-science/sociology double major Rachel Storch, who works minimum wage 25 hours a week at a grocery to somehow try and pay for tuition that is about $22,000 a year, as well as $500-plus for books, and $500-plus for housing costs.

She is starting to deal with the fact that her dream of postgraduate law degree schooling may not come true.

“I think about it every day, what I would do if I had to go a fifth year (just to complete her undergraduate schooling.) It’s an obscene amount of stress,’’ she said.

She is coping with “an astronomically high amount of student loan” debt while taking in about $181 a week.

“Students everywhere have issues. You want to get a job you love,” but instead, “you will get a job that pays the bills.”

New Jersey students graduate with an average of $26,000 in debt to repay.

The legislators said they want a commission to study the methods that could be used to help finance college and help students repay debt.

Third District Assemblywoman Celeste Riley has a “pay forward’’ bill that would put money in students’ pockets to pay for schooling and then have them repay it once they graduate and get a job.

In addition, Sweeney, Riley and district-mate John Burzichelli called for establishment of a pilot program that would create partnerships between county colleges and four-year institutions to provide discounted tuitions, as is occurring between Gloucester County College and Rowan.

But this was about more than just putting a spotlight on one issue.  This is election season, and it was a chance for LD 3 incumbents to advertise their platforms while trying to fend off GOP challengers, drum up support for the minimum wage hike referendum that also is on the Nov. 5 ballot, and to link increases in pay to increases in higher education opportunity.

American Federation of Teachers national President Randi Weingarten came up from Washington, D.C. to say that when a worker takes home less than $300 a week, that means someone is conspiring to keep them in poverty.

And N.J. AFL-CIO President Charles Wowkanech said “This is an issue of fairness. We cannot have a higher education system that is only affordable to the wealthy.”

“We are denying young people their future,’’ Sweeney said in the Ironworkers Local hall here. Emphasizing his blue-collar roots, he said he was not fortunate enough to attend college, but he got lucky and reached a level of success that students today can’t have a chance of matching unless they attend college.

The much higher costs and increased employer demand for a 21st-century-trained work force means that something must be done in New Jersey to help students afford college here, they said. 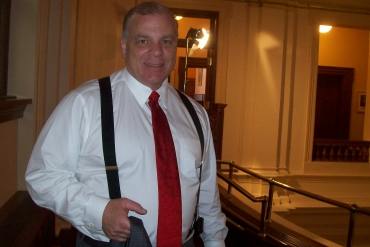