CAPE MAY COURT HOUSE – Debates are often an opportunity for candidates to distinguish themselves and explain to voters why they’re the better person for the job.

Debates are also often a time for candidates to disagree, but not so much in Legislative District 1. It was here in South Jersey Monday evening where the Republican challenger and Democratic incumbent agreed on the issues more often than not.

Taxes? There are too many. Jobs? Not enough. Minimum wage? Sure, New Jersey workers need to earn more but the minimum wage ballot referendum wasn’t the way to go about it. Even Gov. Chris Christie seemed to elicit positive responses from both candidates.

Incumbent Democratic Sen. Jeff Van Drew and Republican challenger Susan Adelizzi-Schmidt squared off in Cape May Court House tonight before about 150 packed into the historic courthouse.

“Honestly, I’m not trying to be funny by keep quoting the governor,” said Van Drew about halfway through the hour-long debate while answering a question about rising property taxes.

“Do we need to do more? Absolutely,” responded Van Drew, but not before reminding voters of what the Republican governor said about property taxes, which is that, despite what progress officials have made, stopping a speeding locomotive takes time.

It wasn’t the first time the Democratic lawmaker mentioned Christie’s name, and it wouldn’t be the last. The incumbent, who went as far to remind voters he even gets “into a little bit of trouble” within his own party because he’s known to vote conservative, made it clear he’s more focused on bipartisanship results than partisan gridlock.

“The reality is we’re not better off from when he took office,” she said, reminding audience members her opponent has held elected office of one kind for more than a decade.

“The lack of jobs and the lack of economic development, … that’s why I got into this race,” said Adelizzi-Schmidt, adding Van Drew has failed to take any responsibility for the district’s “highest unemployment rate in the entire state.”

Adelizzi-Schmidt stayed on message and even managed to deliver a punch to the poised and controlled incumbent after Van Drew continued to remind voters that he was able to save the Vineland Developmental Center from closing.

“It reminds me of a person who keeps re-gifting the same gift year after year,” she said. “My question is, what else have you been doing? What other jobs have you been bringing to the area?”

But the entire event wasn’t without at least one area the candidates didn’t seem to agree on.

What about gay marriage, the panelists asked, noting that as of today New Jersey became the 14th state to allow same-sex couples to marry.

“I support it,” said Republican Adelizzi-Schmidt.

“I was with this governor on the issue from the very beginning,” responded Democrat Van Drew, adding he’s with the governor now in his position that same-sex marriage should be decided by voters, not the courts or Legislature.

Van Drew, a former state assemblyman first elected to the Senate in 2007, receives high favorability ratings of 70 percent. Adelizzi-Schmidt faces the challenge of low name recognition; 64 percent of respondents said they are not familiar with her. 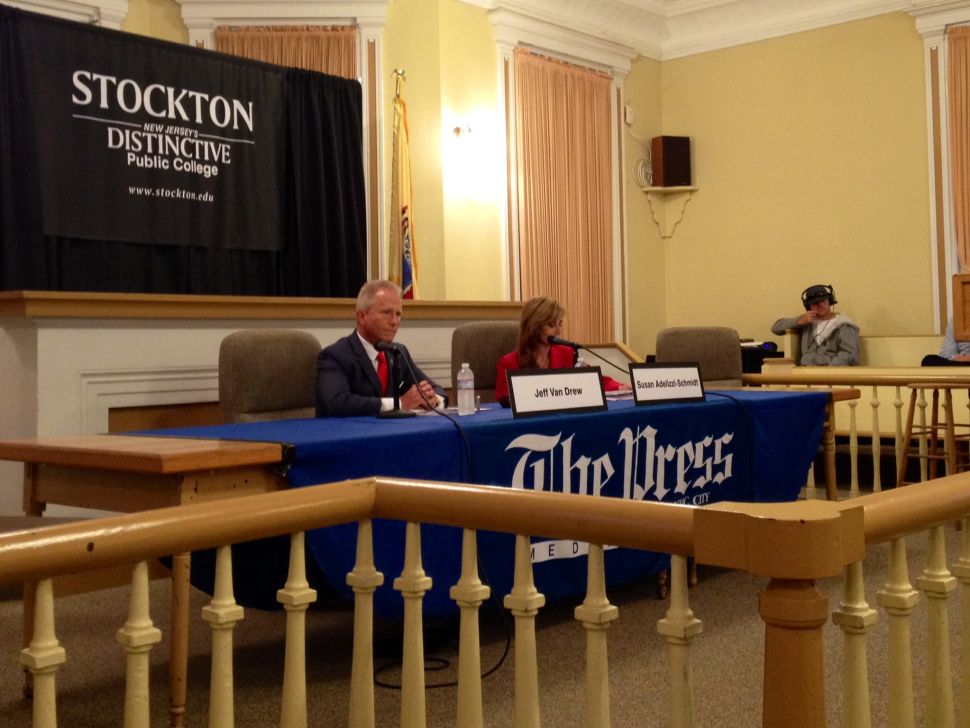