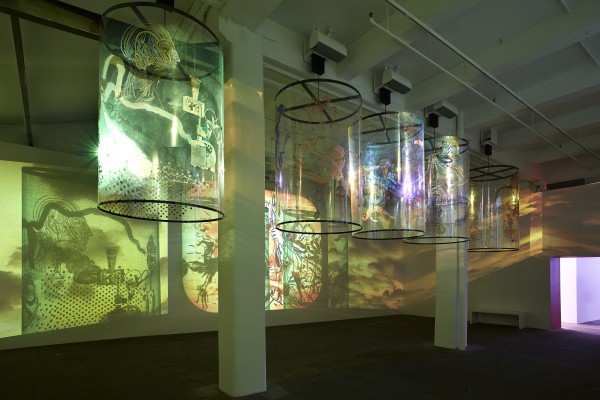 A year after its debut at Documenta 13, in Kassel, Germany, Indian artist Nalini Malani’s haunting sculpture and video installation, In Search of Vanished Blood, has arrived at Galerie Lelong. The shadow play, as the artist terms her ambitious multimedia pieces, consists of five painted mylar cylinders that rotate like Buddhist prayer wheels, projecting a diaphanous web of imagery onto the surrounding walls. Cassandra, the Greek mythological prophetess who is condemned to see the future but never be believed, takes center stage in the work, embodied in a young woman on whose face sign-language symbols flicker like warnings. It’s painfully beautiful, suggesting the sort of dream that would shake you awake with horror and awe.

So it was something of a surprise, meeting Ms. Malani face to face for the first time via Skype, to learn that this unnervingly immersive artwork was made by a small woman with short, dark hair and a cheery, lilting voice. She graciously arranged the call for 10:30 p.m. her time, which was not only convenient for me, but ensured the connection would be clearer than during the day since most of her neighbors in Bombay—she never calls it Mumbai—would be heading to bed. “This is the first time I’ve had such a hectic schedule,” the 67-year-old told me, when I asked what she had been up to recently. She had just returned home after opening three shows in three weeks on three continents: at Lelong, at La Centre de la Gravure et de l’Image Imprimée in La Louvière, Belgium, and at the Fukuoka Asian Art Museum in Japan. She professed exhaustion, but she sounded chipper.

Over the past four decades, Ms. Malani has broken through in India’s art world, which is even more male-dominated than in the U.S. and Europe, to gain a towering reputation not only as a pioneer of video art in the country, but as an organizer. In 1985 she put together the first exhibition of Indian female artists, in Delhi, and this year she became the first Asian woman to receive the Arts & Culture Fukuoka Prize for her “consistent focus on such daring contemporary and universal themes as religious conflict, war, oppression of women and environmental destruction.” 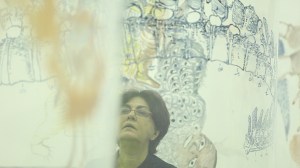 Malani at Documenta 13. (Courtesy the artist and Galerie Lelong)

Since the early 1990s, Ms. Malani’s work has tackled the legacy of the Partition of India, a cataclysmic event that divided India along religious lines, forcing her own family to flee their home in Karachi (now part of Pakistan) and relocate to Calcutta when she was still an infant. “For my parents and grandparents it was a big trauma, and I lived with that trauma,” she said.

She is committed to the idea of the artist as social activist, a notion that reverberates throughout In Search of Vanished Blood. The show’s title, taken from a well-known Urdu poem by Faiz Ahmed Faiz, alludes to lives destroyed or inexorably altered by Partition. Writing after the Indo-Pakistani War of 1965, he asked, “This blood which has disappeared without leaving a trace/isn’t part of written history: who will guide me to it?”

Ms. Malani finds the answer in Cassandra, whom she first encountered in the allegorical novel Cassandra (1984) by the East German cultural critic Christa Wolf. For the artist, Cassandra represents the repressed woman, whose intelligent, feminine vision is lacking in the world, and whose nurturing instinct is trivialized in women and stifled in men. “Each one of us has the Cassandra phenomenon in us,” Ms. Malani said. “We all know about the calamities that are taking place on our planet and what the future will hold. However, we don’t do much about it.” If we listened to our own inner Cassandras, she suggests, things could change.

A bookworm who illustrated short stories for newspapers in the late 1960s, Ms. Malani draws from literature not only in content but also in her artistic approach, which ranges across mediums. Experimentation was not widely accepted in Bombay when she began her formal art studies there in 1964, but she noticed that writers were able to use various fluid formats, like the short story or travelogue, to express specific ideas and experiences, rather than forcing their ideas to fit a single, rigid mold. Why couldn’t she do the same with art? “I would have the short story and the novel—the novel would, of course, take much longer, require much more thought going into it and much more research, which then led to video plays and theater works—and the shorter works were like small paintings and so on,” she said. 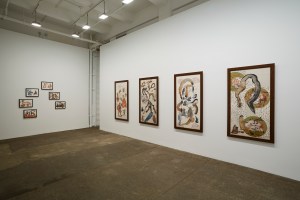 In Search of Vanished Blood is undoubtedly her novel, one that is aesthetically gripping and politically trenchant. “I really believe in the sense of beauty to seduce the viewer,” Ms. Malani said. If it achieves that, she said, “You begin to think of what it is telling you.” But that beauty sometimes requires some decoding. Her work takes in everything from hieroglyphs she saw on a preteen trip to Egypt with her mother to botanical illustrations made by a grandfather. (She actually considered a career as a medical-textbook illustrator, and began studying the human body at 16.)

Nature and culture dovetail in her view of the world in remarkable ways. In 2007, she was having an intense discussion with her friend Carolyn Christov-Bakargiev, who served as artistic director of Documenta 13. “I said, ‘I’ve read and heard ecologists bemoan the fact that we’re losing our earthworms, and if we lose our earthworms, who is going to turn the soil?’” she told me. At the time, the Urdu language was slowly dying out in India, and with it, Urdu culture. The possible loss of the earthworm struck her as a tragic metaphor. “For my parents and my grandparents, the loss of language, the loss of culture, the loss of their land—they were farmers—always made a lot of difference. My mother still lives, she’s 92, but till today she speaks of the seasons, and what she would eat in each season, and how much she misses it, even now.”

It took a while for Ms. Malani to broach the deeply personal subject of Partition in her work, or even to consider herself an artist. “The word ‘artist’ had a feeling of awe,” she said. “It was something to be achieved.”