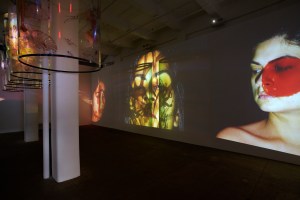 When, during her first solo show of paintings in 1966, an older, male artist informed her that painting was a man’s world, her resolve bristled. She moved to Paris in 1970, where she experimented with 16 mm film, and at age 27 after three years in France returned to India to begin filming in a Muslim slum outside Bombay. But after four months of shooting, she arrived one morning to find the entire area razed; devastated, she abandoned the project. Over the next two decades, she raised two daughters and continued painting large canvases of family life.

She underwent an artistic sea change in 1992, after sectarian violence hit India with the Hindu-led dismantling of the 16th-century Babri Mosque. Her memories of Partition reactivated, she saw how art might be used as a peaceful form of protest. Film seemed the easiest way to reach a broad audience. Especially troubling to Ms. Malani was the way women bore the brunt of male-led religious violence, which came to a head in 2002 when riots in a Muslim neighborhood of Gujarat led to the mass rape, sexual mutilation and burning alive of women in the area.

Ms. Malani grappled with these terrors in Unity in Diversity (2003), and now, 10 years later, continues to deal with these issues with In Search of Vanished Blood. German literature scholar Andreas Huyssen, who’s also a friend of Ms. Malani’s and wrote the show’s catalogue essay, told The Observer that one strength of her work is that it is “focused not just on feminism in a Western sense, but on the history of women in relation to the Indian partition, Indian nationalism, Hindu politics today, and violence toward minorities.”

Variations of Partition have happened all over the world, from the genocides in the former Yugoslavia and Sudan to the current conflicts in the Middle East, and so Ms. Malani has trawled international waters for archetypes of defiant women: Bruegel’s Mad Meg, the Hindu goddesses Radha and Sita, and Western icons like Medea and Lewis Carroll’s Alice. “One of the greatest imports of Nalini’s work is not only the recognition of and the insistence on the lives of women as particular individuals, but also as epic and mythic,” Whitney Chadwick, a feminist art historian who first met Ms. Malani in the 1980s when she was working on her book Art, Women and Society, said. “All of these deaths, which we tend to think of somewhat abstractly, are actually registered as the bodies and souls and minds of women.”

One finds in Ms. Malani’s work not only images of past travesties, but possible, feared future ones. Ultimately, Cassandra’s prophetic curse presents a conundrum in the artist’s work, as it does with so much art that takes up social concerns. Addressing an often-willfully ignorant world, it asks how artists can move beyond being mere Cassandras and actually effect meaningful social change. Her own answer? “Cassandra had the gift of prophecy but nobody believed her, because she had also the curse of Apollo…If we become aware of both of these factors that operate in us, there would be a little more action to stop things from continuing the way they are,” she said. In the meantime, her installations create a space for thought in which we can identify our own willful ignorance and begin to combat it seriously through conscious dialogue. In Ms. Malani’s mindful world, the end of Partition begins with a conversation.