HAMILTON – He called it a war at the start of the cycle, a much-derided characterization of a field of political combat already more or less decided during a 2011 backroom redistricting exercise at the Heldrich Hotel.

But in Hamilton, fertile split ticket territory, where even some of the office complexes turn out to be diners when you go inside, Assembly Minority Leader Jon Bramnick (R-21) Saturday gave the appearance of a politician on war footing.

Vast stretches of box store mayhem pass without a trace of politics to south and southwest, but here, the streets are crammed with the names GREENSTEIN, INVERSO, YAEDI, PLUMERI, COOK, DEANGELO, etc.,

A devilish grin amid pizza boxes disappeared as soon as Bramnick started speaking.

“I come from Plainfield,” he told a roomful of Hamilton pols wearing game faces, among them former state Sen. Pete Inverso and Inverso’s former chief of staff Steve Cook, now aggressively running for an Assembly seat.

“Where I’m from, when you hear someone say ‘he ain’t playin’, you know what that means? It means a fight is going to start. And you know what, we ain’t playin’,” explained Bramnick, who arrived today with an envelope and a check inside for the Republican candidates for the Assembly in this battleground district (42,922 Dems/23,700 Republicans/62,525 independents).

Cook said he has pounded on 5,000 doors and challenged the incumbents – in vain – to debates.

“The people here in the 14th District are losing out on a debate over the real issues,” said the Republican.

According to one source close to the LD 14 incumbents, Democrats have a poll that shows state Sen. Linda Greenstein (D-14) up nine points over former Senator Inverso, DeAngelo with a 22-point lead over the GOP, and Benson in the mid-teens.

Arguably the most battle-tested senator in the state and, in the words of one veteran Democrat, “New Jersey’s best retail politician,” Greenstein has already defeated Tom Goodwin and Inverso political protégé Richard Kanka in back-to-back encounters with the GOP.

“Glad-handing outside shopping centers is not a substitute for taking real stands on the issues,” Inverso said.

Down below, at the very least, Cook wants to catch Benson.

Democrats – or anyway the independent expenditures speaking for them – see Inverso as the main target, and have poured 90% of their firepower at him and his connection to Roma Bank.

“This has been the ugliest campaign I’ve ever been in, and I’ve been in some ugly campaigns,” Inverso said. “This one has reached a new surface level of low.”

Democrats have spent a million dollars of their own money so far on their re-election campaign, and have received the cover fire of an ongoing profusion of ads from indies, most notably the Fund for Jobs, Growth and Security, which has ties to George Norcross III.

“We all know it’s bull, and that’s the problem,” Inverso said of the barrage of advertising assailing him.

Bramnick bucked him up at the front of the room.

“A man of true integrity,” the minority leader said.

“Hopefully enough people know me and they’ll look at those ads and know they are misrepresenting me, and the ads will create an emotional reaction in people,” Inverso said.

There’s a mayor’s race for a full four-year term of a seat occupied by man now behind bars. That’s John Bencivengo, who took cash under the table because he said he couldn’t pay the local property taxes. His running mate, Mayor Kelly Yaede, wants to complement Inverso at the local level, while fending off Democratic challenger Barbara Plumeri.

The affable DeAngelo – an assistant business manager for IBEW Local 269 – has the strongest labor ties in a labor district, and a regular chair of honor at the Ancient Order of Hibernians. But while the enviros love his incumbent Democratic running mates, they’re not thrilled with some of DeAngelo’s pro-construction legislation, and are running independent expenditure TV against him.

Inverso, Cook and the GOP hope for some coattail love from Gov. Chris Christie, who presided at a fundraising breakfast for Inverso this past Thursday.

They expect two more appearances by the governor in the district before Nov. 5.

“Our models during redistricting showed the Democratic map that prevailed not being able to withstand – in swing Democratic advantage districts – a Christie victory by over 20 points,” a hopeful GOP source told Politickernj.com.

So on this sweep through here today with his legislative cohorts, Bramnick stayed relentlessly on message.

“Corzine Democrats are trying to masquerade as Christie Republicans,” he said, grinning. 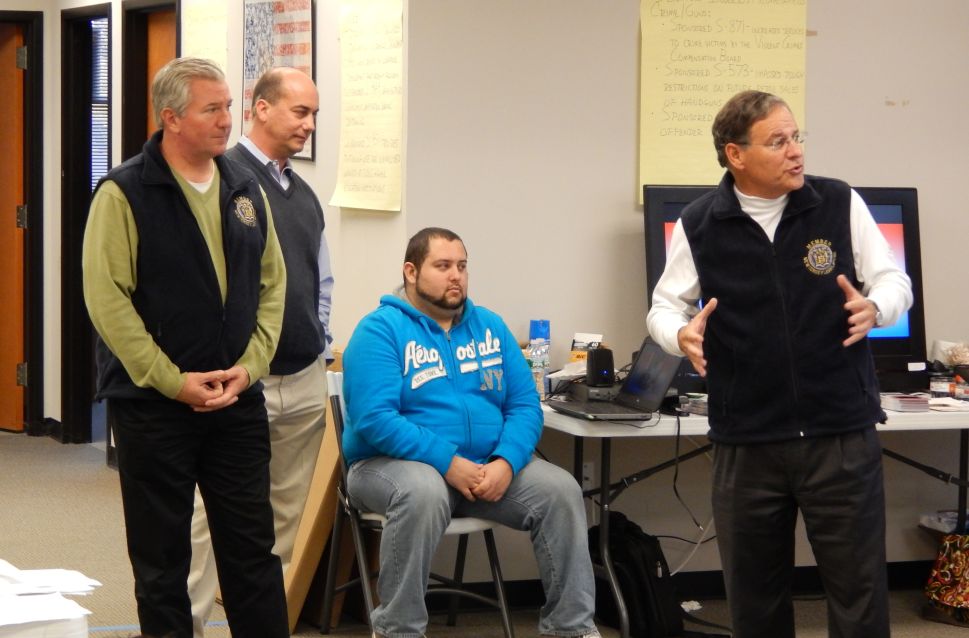