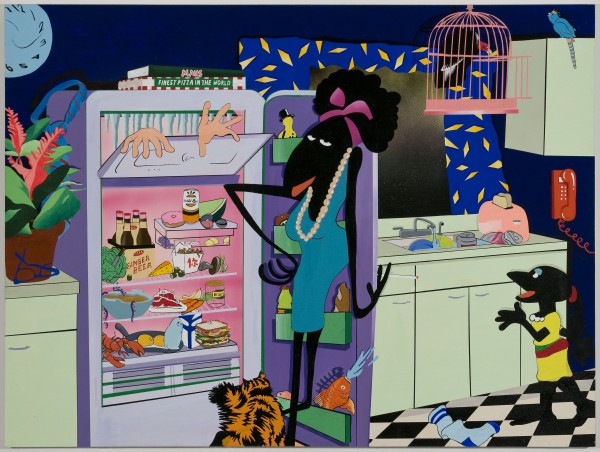 ‘Midnight Snack’ (2013) by Juliano-Villani. (Courtesy the artist and Rawson Projects)

Everything is going wrong in Jamian Juliano-Villani’s hyper-frenetic, brilliantly colored, expertly designed, cartoony paintings, but you would not want it any other way. In Midnight Snack (all works 2013), two hands leap out of the freezer, a goldfish somehow residing on a shelf in the fridge is spewing water, and the clock on the wall appears to be spinning out of control. There are at least a dozen other sources of concern, but the older black woman and young black girl in the room look entirely blasé. What in the world is going on here?

That question pops up immediately and repeatedly viewing each of the five paintings in this 26-year-old artist’s breakout New York solo debut. In The Devil’s Cookbook, she has Satan stirring up an electric green-purple stew, while in Bounty Hunter she has suspended gravity, sending a menagerie of bottles, boots, bullets, James Rosenquist-style spaghetti, a Martin Kippenberger lamp and other objects flying in every direction in a mountain landscape.

Ken Price’s graphic work and Erik Parker’s paintings are definite influences, but Ms. Juliano-Villani tends to render her fantastical surrealism with an exacting precision and in otherwise mundane environments (an all-night diner, the kitchen), fomenting an alarming tension between the imagined and the real that one might find in artier comic books or avant-cartoons like MTV’s 1990s series Aeon Flux.

Gamely overloading her brazen, bawdy paintings with more content than can be easily digested, Ms. Juliano-Villani threatens to overwhelm but almost always manages to pull back from pure chaos, winning a coherence that feels provisional and fresh. Things are falling apart, but we’re in capable hands. (Through Oct. 20)