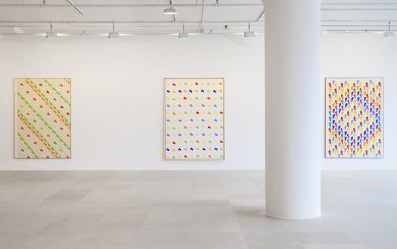 It’s one of the great, foundational stories of postwar art. In 1963, variously finishing or fresh out of the Kunstakademie Düsseldorf, Gerhard Richter, Sigmar Polke, Manfred Kuttner and Konrad Lueg coined West Germany’s answer to American Pop art, Capitalist Realism. The first two went on to become the best German painters of their generation; the latter two, not so much. They both quit art in 1967. Kuttner went into PR. Lueg became Konrad Fischer (Lueg was his mother’s maiden name), opened a gallery in Düsseldorf and became one of Europe’s greatest contemporary art dealers. Outside a 1999 retrospective at PS1 that came three years after his death, his artwork has rarely been seen. Far from being merely a curiosity, his first-ever U.S. gallery show offers real pleasures.

The show covers just a few years, 1963-67. Early paintings include bright, blobby, almost-abstract fingers and anonymous portraits in casein tempera, ovular holes cut out in the center of their faces. They’re funny and a little unsettling. Next came his most appealing art: punchy paintings of dingbat motifs from towels, facecloths and wallpaper, each element in the pattern laid out deadpan against a white ground. Not quite precise enough (and thus not trippy enough) to be Op, they anticipate Pattern and Decoration painting while gently mocking bourgeois style.

Lueg wrapped stretchers with printed plastic film to make quirky little readymade paintings—a trick that’s popular again these days—and spare collages that pair photos with stickers, of rosy-cheeked babies, most memorably. This is all pleasant, clever work but ultimately minor. A case in point: his Untitled (Onkel) (1965), of a faceless, bald, besuited man covered in wallpaper patterns is charming and innocuous; it doesn’t stand a chance against the haunting portrait that Gerhard Richter painted from a photograph the same year of his grinning, Nazi-supporting Uncle Rudi. “I had zero confidence in what I was doing as an artist and was happy to find something else,” Fischer said late in life. It turns out that he had plenty to be proud of. Still, he made the right choice. (Through Nov. 16)