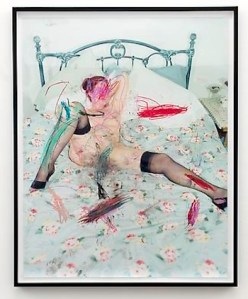 Mitchell-Innes & Nash will now represent Leigh Ledare, the artist-provacateur best known for “Pretend You’re Actually Alive,” a shock-packed series of pictures dealing with his mother’s sexuality. (For all you Frieze-goers, some of these photographs are currently on view at The Photographers’ Gallery in London.) Obvious influences include Larry Clark, for whom he used to work as an assistant, and Nan Goldin, who curated one of Mr. Ledare’s shows in 2009.

For another, somewhat less scandalous, project, “Double Blind,” Mr. Ledare photographed his ex-wife in an isolated cabin and then asked her new husband to do the same. In a more recent collaboration, Mr. Ledare has invited various children, including Julian, the three-year-old son of Chelsea dealer Jose Martos and artist Servane Mary, to draw on some of his photographs (one is pictured at left).

Below, the announcement in full.

Mitchell-Innes & Nash is pleased to announce its representation of New York based artist Leigh Ledare.

Ledare uses photography, archival material, text and film, to explore issues of human agency, power dynamics, social relationships and control. Ledare’s nuanced negotiation of the relationship between photographer and subject gives rise to a complex and thoughtful body of work, questioning notions of subjectivity and the performative aspect of identity.