ELIZABETH – Veteran Senator Ray Lesniak (D-20) had said he wanted to dance at the wedding of activists Marsha Shapiro and Louise Walpin.

When the New Jersey Supreme Court on Friday ruled that it would not issue a stay of a lower court ruling green-lighting marriage equality, Lesniak, who co-sponsored the marriage equality bill in the state Senate, invited the couple to his home for one of the state’s historic first same-sex marriage ceremonies.

Will the sight of same-sex weddings statewide imperil Democrats in battleground districts, PolitickerNJ.com asked the senator.

He gave a perplexed look in response.

“No, it will have no impact on battleground districts,” he said.

But Lesniak said even those who don’t now support it respect those lawmakers who stand up for it.

“I’ve said all along that every legislator should vote their conscience,” he said.

As for Gov. Chris Christie, who vetoed Lesniak’s bill, the senator said, “Gov. Christie does not understand the meaning of this at a human level. And that’s sad. Partly, it’s a political issue.” 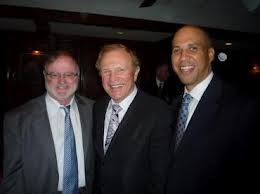