Pointing to a rising rate of shootings in one Brooklyn precinct, Joe Lhota warned yet again that his main rival in the mayor’s race, Democrat Bill de Blasio, would usher in a new crime wave if he’s elected.

“I know most New Yorkers are so accustomed to having safe streets, but the past few weeks have shown us … what can happen if I believe our police officers are not able do their job because of the City Council legislation,” said Mr. Lhota, who has made public safety a centerpiece of his campaign. “You can look all around the country when people ease up on their policing efforts. Look at Detroit, look at Chicago.”

Speaking at a press conference this morning, Mr. Lhota highlighted a relatively small sample to make his point: a 28-day report noting eight shootings, five rapes and 57 robberies occurred in Flatbush’s 67th precinct, all up from a year ago. Mr. Lhota argued Bill de Blasio’s support of City Council legislation designed to curtail the police’s controversial stop-and-frisk would only make things worse.

“We’ve been now through two debates, several quiet weeks for Mr. de Blasio and not once has there been a policy that he’s offered that would keep New Yorkers safe,” Mr. Lhota charged. “A lot of ideas are pie in the sky but not one that deals directly with public safety.”

He further rejected the notion that stop-and-frisk in its current incarnation is unconstitutional–despite a federal judge’s ruling against it several months ago–and maintained that minorities in neighborhoods like Flatbush were not having their individual rights violated. He challenged one reporter to find “the hypothetical person” in the area that was suffering because of the NYPD’s policies.

When Politicker asked if Mr. Lhota would fear for his personal safety were Mr. de Blasio to win the race, Mr. Lhota was unequivocal.

“It’s disappointing that Joe Lhota continues to take a page out of the right-wing, Giuliani playbook with his baseless fear mongering,” said de Blasio spokeswoman Lis Smith in a statement. 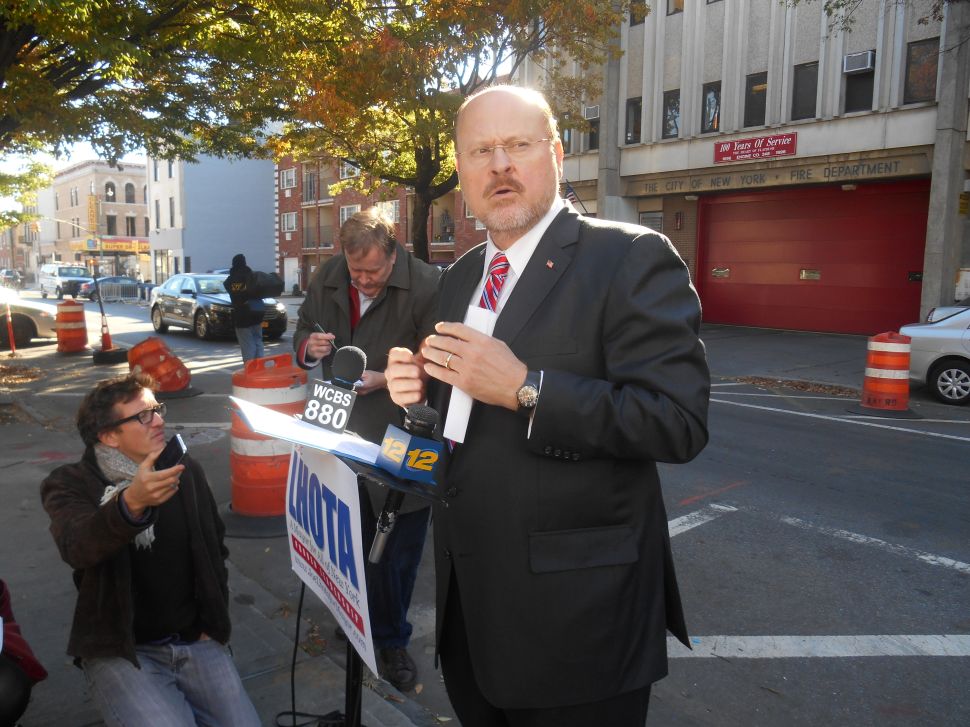