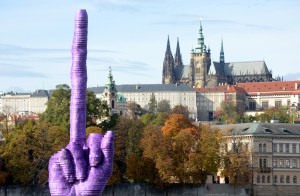 Uh oh, it turns out that “art fairs like London’s Frieze are a symbol of society’s grotesque inequalities.” [The Guardian]

The Smithsonian Institute followed by the San Francisco Museum of Modern Art attracted the biggest donations of the country’s cultural institutions in 2011-2012. [LA Times]

French parliament votes to reduce the import tax on art from 7 to 5.5 percent, just in time for FIAC, the modern and contemporary art fair opening tomorrow with a VIP preview at the Grand Palais. [The Art Newspaper]

“Premier poster collections that were forfeited when the Nazis came to power in Germany and Austria are gradually going on the block after being returned to the owners’ families.” [NYT]

Here’s a profile of the artist Jeff Elrod. [WSJ]