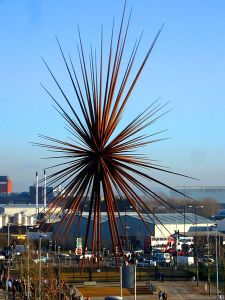 “The B of the Bang, Manchester, England,” by Thomas Heatherwick. (Courtesy Wikipedia)

Developer Stephen Ross has selected Thomas Heatherwick to create a public artwork, “a new icon for the city,” at the center of the $15 billion Hudson Yards development. Related Cos. plans to spend up to $75 million on the project. This is almost guaranteed to be a disaster. [WSJ]

Re-modelling the Picasso museum has not gone well. [NYT]

Two the world’s five Van Gogh sunflower paintings will be reunited at London’s National Gallery next year. [The Guardian]