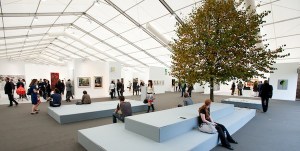 Christie’s is bringing another impressive Rothko to market. Their last one, from the Pincus Collection, sold for almost $86 million, a record for a postwar artwork at auction. [Art Market Monitor]

Scott Reyburn files a new little preview of the Frieze Art Fair. Gagosian, which “never discloses prices to the media,” will have five Koons sculptures on offer. [Bloomberg]

“Thomas Campbell, the director of the Metropolitan Museum of Art in
New York, is given a light grilling in the “Questionnaire” slot of the
Frieze Masters magazine. The museum supremo bats away weighty
questions about his favourite art historians and inspiring works in
the Met’s collection, conceding that “we should have more American
Indian and Latin American art”. But one line of enquiry about “an art
form you don’t relate to” brings an unexpected response from Campbell.
So, which style stumps the intellectual—is it 17th-century Islamic art
or Ukrainian Suprematism? “Reality TV,” the scholar reveals.” [The Art
Newspaper]

London’s Frieze Week is bigger than ever this year and could move as much as $2 billion of art. [Bloomberg]

Lucian Freud has his first exhibition in Austria, the home of his relatives (obvs). [WSJ]

California artist Wayne Thiebaud donates seven works to the Laguna Art Museum in Orange Country, where he had a retrospective in 2007. [Los Angeles Times]

Here are portraits that Wayne Lawrence snapped at the Bronx’s Orchard Beach, the only public beach in the borough. [The Guardian]