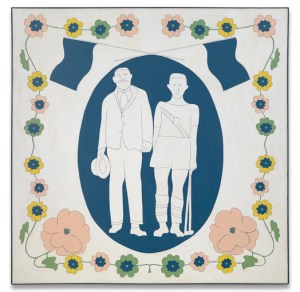 “These Donors Will Take Anything but Manhattan.” Robin Pogrebin talks to philanthropists who give their money to museums in the other four boroughs. [NYT]

The World Monuments Fund placed the Cloisters and the Palisades in New Jersey on its list of endangered cultural sites because of LG Electronics’ plan to build a corporate headquarters in Englewood Cliffs, N.J. [NYT]

Heirs of Jewish art dealers are seeking the return of the Guelph Treasure, a 12th-century gold reliquary estimated to be worth $200 million, from a Berlin museum. They say that their ancestors were forced to sell it by the Nazis in 1935. [Bloomberg]

Janet Cardiff talks to The Wall Street Journal about the installation of Forty Part Motet at the Cloisters. [WSJ]

“[Lady] Gaga’s new Jeff Koons-designed cover suggests she’s the first singer to be influenced by both Botticelli and Geri Halliwell.” [The Guardian]

Paul Schimmel has organized a non-selling exhibition for Hauser & Wirth in London from the holdings of collector Reinhard Onnasch. Worth clicking just for the photo of two great John Wesleys. [NYT]

“The New York City Council is expected on Wednesday to decide the fate of 5Pointz, the brick warehouses slathered in oversized graffiti that became a cultural institution in a once-working-class neighborhood of Queens.” [NYT]

Police have tracked down a Joan Miró drawing that went missing nearly three years ago. [The Art Newspaper]

“If you want to see the evidence of the grotesque and growing inequalities in our society, then stepping inside the Emerald City that is Frieze is a really good way to do it,” writes Charlotte Higgins. [The Guardian]