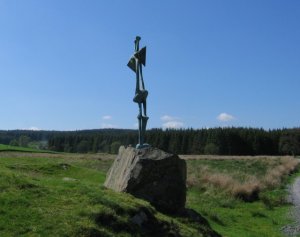 A Brueghel that has secretly remained in one family for 400 years will be offered at Frieze Masters for £6 million ($9.6 million). [Financial Times via Art Market Monitor]

Carol Vogel hits the museums and auction previews in Doha, Qatar, where Sotheby’s contemporary art exec Alexander Rotter says that collectors are “in it to win it.” [NYT]

“Four lucky tourists snapped up artwork by elusive British street artist Banksy in Central Park over the weekend, shelling out just $60 for canvases estimated to be worth as much as $31,000.” [NYP]

A Henry Moore bronze has been stolen from a Scottish sculpture park. Standing Figure is the  latest in a slew of Moore thefts, with other works disappearing in 2005, 2010 and 2012. [The Guardian]

“Fear of litigation makes art historians even more reluctant to give their opinions.” [The Art Newspaper]