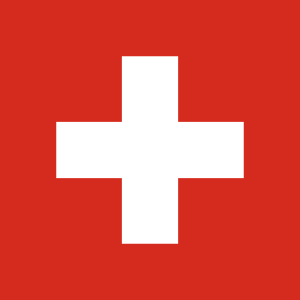 The flag of Switzerland, which is one of only two sovereign states with a square flag. (The other is Vatican City.) (WikiMedia)

Calder’s heirs say his “trusted dealer,” Klaus G. Perls, “swindled the artist’s estate out of tens of millions of dollars.” There are allegations of forgeries, Swiss bank accounts and at least one big payoff. A lawyer for Perls’s heirs also dropped this line in court documents, “Alexander Calder and Klaus Perls were kindred spirits in that they both had an aversion to paying taxes.”  [NYT]

The 2013 Marcel Duchamp Prize goes to Latifa Echakhch, who really should have a New York gallery. [Artforum]

“Tobias Natter, the director of the Leopold Museum in Vienna, quit his post to protest ties between museum board members and a new foundation set up to manage a Nazi-era film director’s collection of Gustav Klimt artworks.” [Bloomberg]

“The director of the Ecole nationale supérieure des Beaux-Arts, Nicolas Bourriaud, has defended the decision to seek sponsorship for the prestigious art school after students protested against an event at the college hosted by the US fashion designer Ralph Lauren.” [The Art Newspaper]

“The battle of the superyachts.” Zaha Hadid’s looks amazing. [The Guardian]

“A four-year review by more than 400 Dutch museums and galleries has turned up a list of 139 artworks that may have been forcibly taken from Jewish families during the Nazis’ reign, the BBC reported on Tuesday. The works, which include a Matisse and several by Dutch artists, are listed on a special website. (An English version of the site won’t be available until 2014.)” [NYT]