Almost 20 years after the election of Rudolph Giuliani—a seismic event in New York political history—New York is preparing to turn the page on a remarkable era of change, challenges, tragedy and progress.

We believe Bill de Blasio is the better choice to guide the city as it continues to adapt to the challenges of the 21st century.

Our choice may surprise some readers—and perhaps even Mr. de Blasio himself. We did not endorse him in the Democratic Party primary, and we were skeptical, to say the least, of his divisive rhetoric over the summer. His harsh criticism of the New York Police Department and his embrace of higher taxes as the solution to New York’s problems struck us not as progressive but as retrograde—ideas and rhetoric better suited to the New York of 40 years ago.

But the Bill de Blasio we’ve encountered in the weeks since his primary victory has given us reason to hope that he will build on the successes of the last 20 years, and that, in the end, he will see Wall Street and the real estate community as partners, not as enemies.

Ideologically, this page prefers the positions of Republican Joe Lhota, a successful manager who is socially liberal and fiscally responsible. But Mr. Lhota’s campaign has been a huge disappointment, raising questions about his ability to govern. Mr. Lhota is a decent man, but he simply has been unable to articulate where he’d like to lead us.

Mr. de Blasio, on the other hand, has run a superb campaign, and, yes, that means something. What’s more, he’s as smart as they come, and, despite the caricature of his own making, he can be quite reasonable.

We like his focus on affordable housing and job creation—they are two of the most-important issues his administration will face. On housing, we’re concerned that to this point it’s just vague rhetoric. If he really wants to lower the cost of housing production and build more affordable housing, he will need to consider new labor work rules; simply imposing requirements on builders is not sufficient. But he’s absolutely right when he says we need to get more federal money for our infrastructure needs. He must also be a forceful advocate in Albany, where our governor seems to take the city for granted as he looks to build his brand upstate. Mr. de Blasio sounds sincere when he says that he wants to make the city an easier place to do business. We’ve made progress toward that goal since the 1990s, but there’s a lot more work to be done.

Despite his criticism of the city’s stop-and-frisk campaign, Mr. de Blasio knows that his administration will be judged a failure—and the city will take many steps backward—if crime begins to rise again over the next four years. As mayor, we believe he’ll be practical, not ideological, in dealing with public safety issues.

We’re concerned about his sympathy with the city’s public employee unions—many of which endorsed other candidates in the primary but all of which will be expecting big raises in next year’s contract talks—and his antipathy for charter schools. It’s imperative that he hear all points of view before making critical decisions on these two issues.

So our support is cautious, but hopeful. But we do believe he is the right choice for New York in 2013. 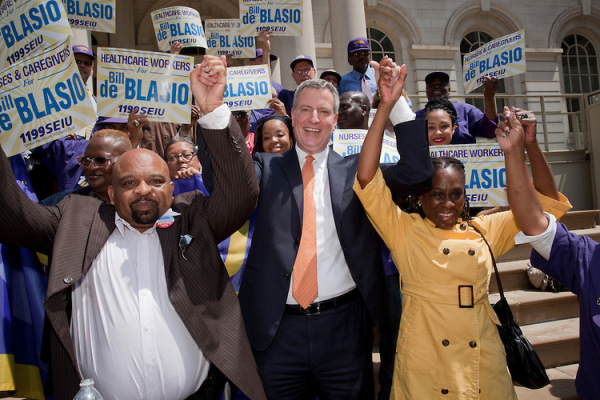