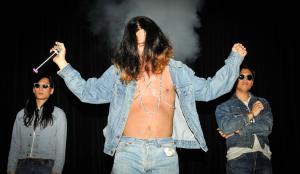 From the original performance. (Courtesy BFA)

If you missed Korakrit Arunanondchai’s performance at the SculptureCenter gala this week—and, let’s be honest, you probably did because tickets were very expensive—you’re in luck! Mr. Arunanondchai will re-stage his gala-stealing performance, which involves Thai men in denim smoking e-cigarettes, tomorrow, Saturday, Oct. 12, at Suzanne Geiss Company in conjunction with the gallery’s “Digital Expressionism” show, in which Mr. Arunanondchai has work.

Other performers include Martín Guterrez and Lauren Devine. Details below:

Martín Guterrez
Martín will be performing 90s classics live, calling on his pop star alter ego ‘Martine’. Gutierrez is interested in nostalgia, creating a space where one can feel comfortable going to a sentimental place of happy personal association.

Lauren Devine
Appearance and live performance by pop star Lauren Devine to celebrate the release of her latest video and ringtone for her new single “Try Sexual”.