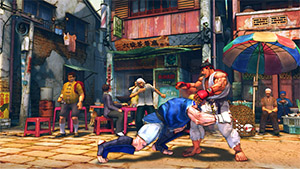 If you’re looking for something to do tomorrow evening why don’t you put on a dapper suit, grab your best gal and head on over to Zach Feuer gallery, which will host a Street Fighter tournament in conjunction with its current video game-centric show by Jon Rafman “YOU ARE STANDING IN AN OPEN FIELD.”

Details, such as they are, below:

Please join us for a Street Fighter tournament hosted by Jon Rafman and Team PIE in conjunction with Rafman’s current exhibition, You Are Standing In an Open Field, at Zach Feuer Gallery.

The event will be in honor of the old Chinatown Fair arcade.

Filed Under: Arts, The Weekend