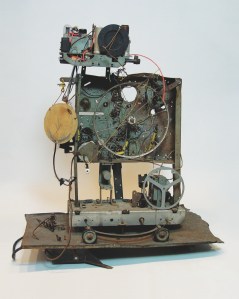 Robert Rauschenberg’s art collection contains wonders. Two years ago, Gagosian Gallery, working with the late artist’s foundation, presented a rich survey of the art that he came to own over his 82 years. And now Sperone director David Leiber, again with the foundation, is offering up this succinct look at Rauschenberg’s holdings in Nouveau Réalisme, the disparate, largely French movement inaugurated in 1960.

Rauschenberg, who famously said that he wanted to make work “in the gap between art and life,” had a natural affinity with the Nouveaux Réalistes, who whipped together found objects, often industrial, worn and discarded, into assemblages that are by turns playful and foreboding.  He was also a close friend of one of its chief practitioners, the mad Swiss bricoleur Jean Tinguely, and assisted him in building what may be his most famous piece: Homage to New York, the “self-constructing and self-destroying” Rube Goldbergian sculpture that created all sorts of mayhem in MoMA’s sculpture garden one evening in 1960 until a fire official shut it down. In Robert Breer’s witty nine-minute film, on view at Sperone, you can see Tinguely soldering his Homage together. An intriguing, if not necessarily decipherable sketch for the piece is here too, along with Tinguely’s Radio No. 1 (1960), a fragile-looking tangle of wheels, wires and metal that hops about the radio dial when operating. It’s unplugged, but a video shows it humming away in all its awkward, antic glory.

Also here are more modest works by Martial Raysse (two small pieces with spoons), Per Olof Ultvedt (another sketch for an elaborate-looking project), Niki de Saint Phalle (a painted roller skate) and Arman (a grid of silver cogs that appear to have melted into their support).

Giving the exhibition a nice bit of context are three Rauschenbergs, one of them a collaboration with Arman. His grittily elegant, jerry-rigged Dry Cell (1963) is a slice of Plexiglas silkscreened with a military helicopter that whirls around in response to sound. It looks like it could have been made by a scrappy young artist just yesterday and is a one-artwork argument that, even 60 years after his emergence as a major artist and five years after his death, Rauschenberg—his art and his legacy—still offers bounties. (Through Nov. 2)