NEWARK – The main players connected to that political powerhouse known as the North Ward Center gathered at the unveiling of a statue downtown, while  mayoral candidate Anibal Ramos went to the heart of the crime-riddled South Ward this afternoon to unveil his public safety plan.

There was probably a message there on the same week fellow North Ward brand name Luis Quintana grabbed a microphone at City Hall and repeatedly identified himself as unbossed, then later cheerily pointed out that Essex County Executive Joe DiVIncenzo hadn’t attended his swearing-in ceremony.

As the organization that originated him struggles to package DiVincenzo’s endorsement of Republican Gov. Chris Christie locally and contends with a shifting political streetscape, Ramos surfacing in the South Ward looked like a man intent on working his own will as a contrast to his fellow globbed-together esteemed dignitaries.

“The mayor’s number one job is ensuring the safety of residents,” said Ramos, standing outside the Fifth Precinct on Clinton Avenue. “Newark cannot achieve its full potential until crime is brought under control. I will take a hands-on, day-to-day approach to reducing violent crime in every neighborhood in the city.”

The knock on Ramos, according to his critics in other corners of this fast-developing May 2014 local contest, is that he’s hemmed in by the organizational trappings of DiVincenzo and Steve Adubato world, and that his austere political training will prevent him from being sufficiently nimble to combat a grassroots guerrilla like Ras Baraka.

At yesterday’s mayoral forum at Rutgers, while Baraka appeared to routinely go off-script in an unstinting effort never to come across as canned, Ramos sounded solemn, non-demagogic organ-tone slogans. While Baraka and Shavar Jeffries grappled throughout, Ramos at times appeared strenuously devoted to ensuring the event lived up to its billing as a forum not a debate.

Now Ramos, by the reckoning of local sources, must prove he can individualize himself from the imperial dimensions of the North Ward, while selling his brand of results-driven organization politics that put the North in charge of the county at-large.

He’s shouldering the biggest issue of the campaign: crime, even as former AG’s Counsel Jeffries consistently presents himself as the only mayoral candidate with a law enforcement background.

Ramos today said he wants to re-engineer the police department, starting with a redrawing of the police precinct lines so they fall along the ward boundaries. He argues it would make each precinct more accountable to its residents in each ward.

He also wants to bolster community policing and provide incentives to patrolmen who walk the beat. He would pay for additional police by creating Business Improvement Districts along the city’s main corridors with the authority to levy a fee for public safety.

Since getting elected to the city council in 2006, the North Ward councilman has spearheaded public safety initiatives, including requiring cameras in liquor establishments.  “My plan also lays out how we will partner with county agencies as well as non-profit and faith-based organizations to provide a host of initiatives for our youth with the goal of keeping them on the right track, in school and on their way to college and a career rather than prison.”

Several Baraka allies stood at the corners of Ramos’s sidewalk presentation and later reported back to headquarters.

“The Ramos plan is a good start, but it obviously was prepared in haste,” said Baraka spokesman Frank Baraff. “It leaves out important elements in what is needed to reduce crime in Newark. We will be releasing our plan next week with a much more comprehensive approach.” 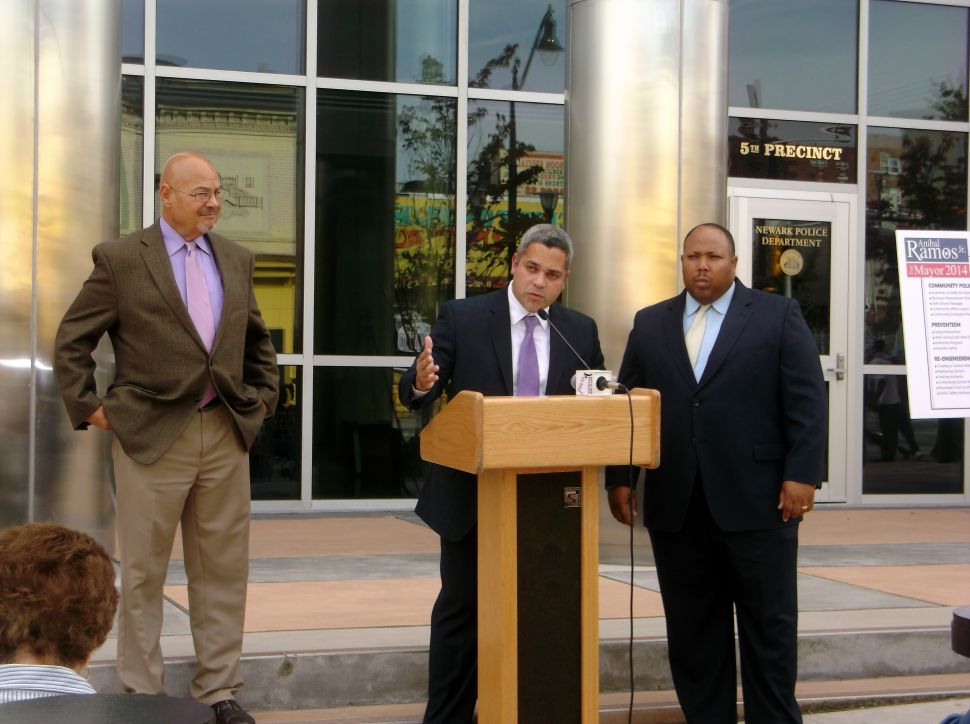