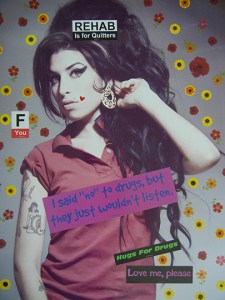 An image from the current Shoot the Lobster show: Bruce Pavlow, ‘Hugs for Drugs,’ 2013. (Courtesy the artist/STL)

Chelsea dealer Jose Martos‘s semi-nomadic project space Shoot the Lobster has cropped up on the Continent before, materializing temporarily in places like Düsseldorf and Marseilles, but it will be in Luxembourg that it puts down permanent roots. The new headquarters will open on Nov. 21 with a group show organized by former Marlborough Chelsea director James Cope, who will be the space’s curator. His debut exhibition will bring together a number of STL veterans such as mystery monochrome painter Henry Codax, photographer Ryan Foerster, Anges Lux and Servane Mary, among others, in addition to few new faces.

“Luxembourg is an ideal location, with it being close to Brussels and Cologne,” wrote Mr. Cope in an e-mail. “The opportunity to work with several artists I know from the area was too good to pass up.” Mr. Martos said he largely decided to open the space because its owner, a Shoot the Lobster fan, offered it to him for free. “It’s going to be a weird destination,” he said, though he won’t be visiting soon, as his green card application prevents him from traveling abroad.

Here on the home front, Mr. Martos is looking for a Shoot the Lobster space on the Lower East Side (it currently operates out of the back room of his West 29th Street gallery, which he plans to turn into a showroom). The next project there, a five-day Tim Lokiec show during which some of the work will be given away for free, opens on Oct. 29. Mr. Martos is additionally planning an STL project with Mr. Cope at a house in Dallas, located in what Mr. Martos described as “a really bad neighborhood.”

Among other bizarre ventures, Mr. Martos said he also hopes to eventually open a sex shop that will feature artist-designed sex toys, an artist-designed bed, pornography and “lots of mirrors.” People will be able to rent the space by the night.