It’s mushroom season in the Northeast, and, to foragers like Marie Viljoen, a writer and urban gardener, that’s a reason to salivate.

On a brisk morning last week, the Transom set off into Central Park on a foraging expedition with Ms. Viljoen as our guide. It was mushrooms we were after—specifically, the coveted maitake, a delicious Japanese fungus that grows near oak and beech trees and sells for anywhere from $20 to $40 per pound—but the park is filled with a diverse array of edible plants, even this late in the year.

For Ms. Viljoen, a native of South Africa and the author of 66 Square Feet: A Delicious Life, One Woman, One Terrace, 92 Recipes, which was published last month, foraging has always been a way of life.

“Foraging to most people is really out there,” Ms. Viljoen said. “It’s weird and bizarre, unless you like plants like me.”

Ms. Viljoen has led many excursions through the city’s green spaces, and this one was part of a program organized by the Peninsula hotel, which offers foraging tours of Central Park followed by a picnic in the Sheep Meadow featuring locally sourced ingredients.

On our quest for mushrooms through the ramble, Central Park’s forest-y midsection, we passed a number of intriguing greens. Ms. Viljoen estimates that there are close to 50 plants to discover throughout the park. It’s not advisable that you eat them—the Central Park Conservancy discourages foraging, and herbicides render many wild greens inedible—but a taste here and there couldn’t hurt, as long as you know what you’re looking for.

Further along, we came across a thicket of orange jewelweed, whose stems, when sliced open, can be used to treat poison ivy. Its seed capsules also make a good snack. Ms. Viljoen popped one into her mouth.

“It’s actually quite a nice little trail mix,” she noted.

Rounding a bend, we came upon a dense cluster of acorns. A gray squirrel was having his way with them, but for humans, it’s best to blanch the acorns first to remove their bitter tannic flavor, though that can be a time-consuming ordeal.

“For me,” Ms. Viljoen remarked, looking down upon the pile of nuts, “life is too short to process an acorn.”

All in all, it was a fruitful tour. We sampled wild cranberries, good in jellies and jams. We passed a clump of ostrich ferns, whose fiddleheads, when prepared correctly, can be quite scrumptious. There were violets, thimbleberries and crabapples, as well as sassafras, sunchoke, spicebush and wild ginger—and, of course, dandelions, which we unjustly regard as nothing more than pesky weeds. (Use their leaves in salads and their dried roots as a coffee substitute.)

Coming to the end of our nearly hour-long excursion, however, no mushrooms were in sight. And Ms. Viljoen seemed disappointed. “I’m very sorry we didn’t find a mushroom,” she said.

Then, as if nature were listening, we came upon a beautiful maitake specimen resting at the base of an aged oak. It wasn’t exactly what we’d imagined. Oddly shaped, it looked like a coral reef or a mutant strain of cauliflower. Nevertheless, Ms. Viljoen was thrilled. “I should say stuff like that more often,” she said. 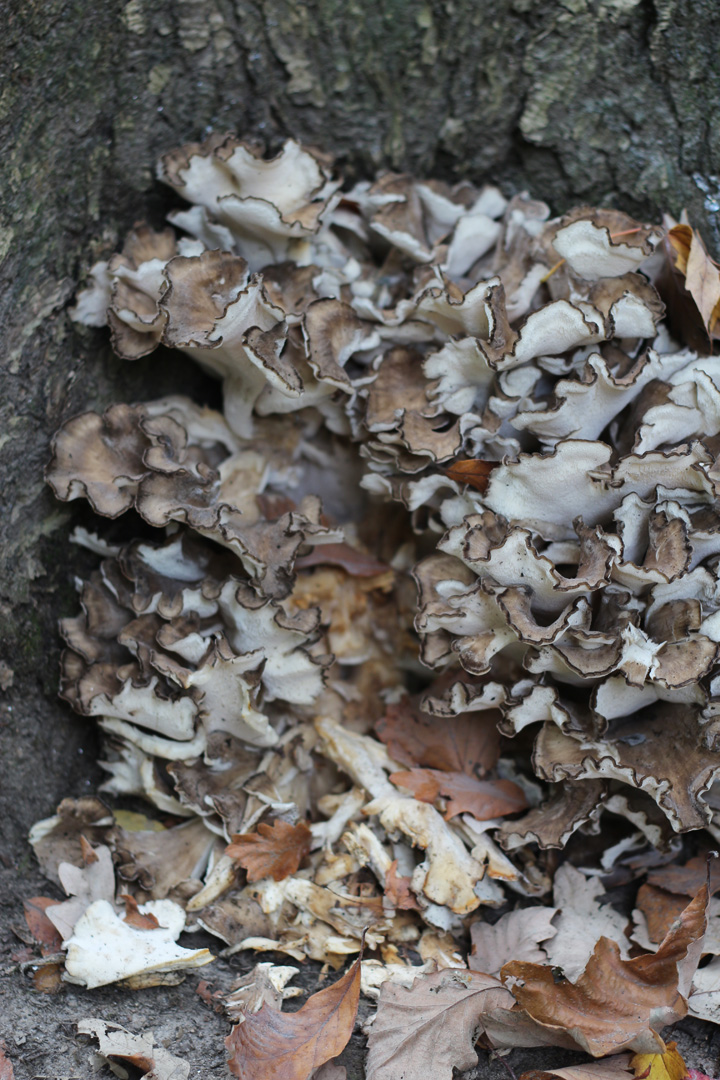