Former Mayor David Dinkins defended his tenure at City Hall and took several shots at mayoral candidate Joe Lhota, after the Republican used him as a punching bag this morning to warn about the return of high crime if Bill de Blasio is elected mayor.

In an interview with Politicker this afternoon, after a day of charged attacks in the mayor’s race, Mr. Dinkins insisted it was “nonsense” to suggest that he was somehow responsible for the crime of the 1990s.

“To suggest that there was no crime when Rudy Giuliani was mayor and we’re gonna go back to quote, ‘the terrible old days when Dinkins mayor’ is so much nonsense,” said an angry Mr. Dinkins, who became mayor in 1990, when there were more than 2,000 murders, according to the NYPD.

“I think that it’s a losing position,” he said of his tenure being made an issue in the current race. “If that’s all Joe Lhota’s got going for him, he’s guaranteed to lose.”

During an appearance early this morning on FOX 5, Mr. Lhota went after Mr. Dinkins, saying that crime under his tenure “went to levels that we have never seen before in the City of New York.”

“David Dinkins–more people died when he was mayor than anything you can possibly imagine,” the Republican charged.

But Mr. Dinkins said crime was already soaring by the time he took office. “I became mayor on January the 1st, 1990. It is illogical to suggest that on December the 31st, 1989, when Ed Koch was mayor, the murder rate was zero and it shot up to a rate of 2,000 in a year, the next day when I became mayor,” he argued.

“Also, it is a fact that crime went down as early as 1991 when I was mayor, thanks to our ‘Safe Streets, Safe City’ program. And Ray Kelly became my police commissioner somewhere around ’91 and ’92, and was largely responsible for helping reduce the crime,” he said. (Murders were indeed down below 2,000 a year by the time Mr. Dinkins was defeated by Mr. Giuliani in 1993–though they fell at a faster clip under Mr. Giuliani’s tenure.)

Mr. Dinkins also pointed out a contradiction, noting that, during a speech in front of the Association for a Better New York earlier this month, Mr. Lhota specifically took time to compliment him for his work combating crime.

“A working economy, a world-class education and an affordable city would be rendered meaningless without public safety,” Mr. Lhota said during the speech. “Twenty years ago, Bill, your father Will Rudin and Mayor David Dinkins understood that and helped changed it using the Safe Streets, Safe Cities program that put more cops on the street and, as a result, was instrumental in making New York City the safest large city in America.”

“He, from the podium, in my presence, gave me credit for crime going down,” Mr. Dinkins said today.

A spokeswoman for Mr. Lhota did not immediately respond to a request for comment on the remarks. 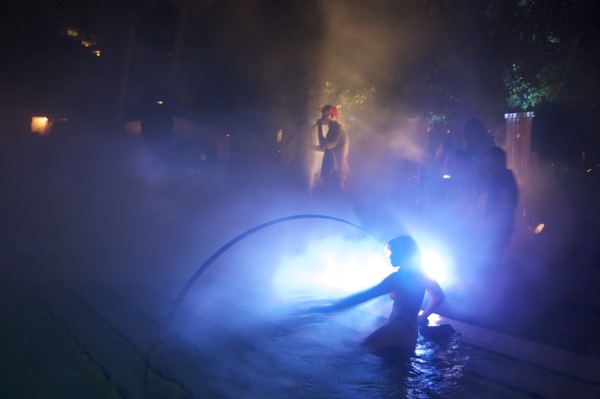