The 32-year-old CMJ Music Marathon, which kicks off tonight and runs through Saturday, has enjoyed an improbably long run as New York’s top indie rock showcase. Recently, Northside Festival and the outdoor Governors Ball have stolen some of its thunder, but CMJ never aspired to be a proper festival. It’s at heart a decentralized industry and press smorgasbord that’s happy to reel in a growing number of locals. And its diffuseness has allowed the event to move with the New York rock circuit as its center of gravity has shifted from downtown to Williamsburg to points ever farther east along the L train.

CMJ’s increasing sprawl has also compounded the event’s reputation as an endurance test for Next Big Things. This year’s most prolific artist may be Hunters, the Brooklyn-based “post-thrash-garage-punk” duo that local rock blog Oh My Rockness promises will take audience members all the way back in time to the Williamsburg of yore (c 2002). Derek Watson and Isabel Almeida are likely smarting from Pitchfork’s 4.9 out of 10 pan of their self-titled LP last week. But Hunters will still shred through six shows between tonight and Saturday, traversing resolutely old school Williamsburg venues (Cameo Gallery, 285 Kent), the Lower East Side (Cake Shop, Fontanas) and the sceney Ace Hotel.

Another up-and-comer is Speedy Ortiz. The erudite grunge revivalists will sludge through shows at 285 Kent on Thursday and Friday and at Silent Barn on Saturday. Should you prefer Southern California cheer to Seattle gloom, head to Le Poisson Rouge tomorrow for an appearance by surf rockers Cults.

Met Costume Institute tributes aside, punk hasn’t enjoyed a graceful ongoing resurgence like garage rock. The three Danes of Iceage are barely of legal drinking age, but have revived the anarchic spirit of Ramones-vintage CBGB at a slew of New York shows since bursting out of the gate in 2011 with “New Brigade.” Frontman Elias Bender Rønnenfelt and bandmates unleash the guttural wails without forsaking melody. They play off-CMJ shows at The Acheron tonight and tomorrow.

Over the past couple of years, aftershocks of the electronic music earthquake have been felt nearly as much in indie rock as in hip-hop and the Top 40. We’ve yet to see a Calvin Harris–Dirty Projectors collaboration, but with Sufjan Stevens and Frankie Rose looking to move dance floors, it may not be so far off. CMJ tips its hat to today’s reigning genre with a Thursday night lineup at Glasslands featuring Mike Simonetti, founder of the synth-loving Italians Do It Better imprint; Ejecta; and, most promisingly, a DJ set from Korallreven, the Swedish electronic pop duo behind the dreamy, oft-remixed “Sa Sa Samoa.”

If that showcase somehow doesn’t sate your hunger for Reagan-era synth hooks, head to the Ghostly International label’s unofficial CMJ party at Output on Friday night. Rounding out the roster of left-field and downtempo electronic talent is Com Truise (aka Seth Haley), who’s been making the CMJ rounds since 2010 and is due for a breakthrough.

Speaking of breakthroughs, one of the biggest star-making turns in CMJ history happened in 2004 when a still-percolating Montreal-based collective called Arcade Fire careened through a set at Mercury Lounge. Nine years later, with a Best Album Grammy and a #1 Billboard debut under their thrift store belts, the indie heavyweights (and occasional punching bags) return to CMJ week, if not the Marathon proper, for back-to-back midnight shows under the pseudonym The Reflektors. Word is the shows will overtake a diminutive art space at 299 Meserole Street on Friday and Saturday, so start lining up or pulling rank now for a spot.

The quirky local act Clap Your Hands, Say Yeah had its CMJ day in the sun one year after Arcade Fire. Unfortunately a charming, Talking Heads-inspired debut LP didn’t sustain the gang for long. Keyboardist and guitarist Robbie Guertin left CYHSY last year, but is still kicking around with Radical Dads, which brings its crisp indie-pop to The Knitting Factory on Saturday night, toward the end of the marathon.

That show offers some food for thought in addition to tunes. The Knitting Factory moved from Tribeca to Williamsburg in 2009 in one of the more prominent revisions to New York’s redrawn musical map. Still, after eight years in an alternately fragmented and commercialized indie rock market, Mr. Guertin can go home again. 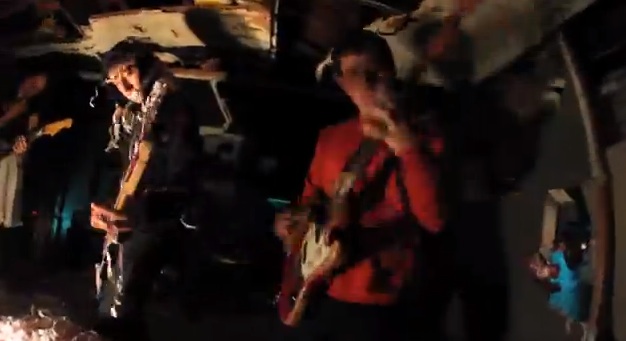