Insiders said when the Police Benevolent Association refrained from jumping into the governor’s contest, it deeply wounded Buono, who had hoped to have men in blue to back up the argument she made today with an outfit that represents nine separate state-level law enforcement agencies and about 400 people.

“This governor trampled on the right to collectively bargain,” said Buono, standing outside the South Brunswick Municipal Building. “The strides of the labor movement were disposable. This governor broke a promise. He told (public law enforcement officers) that he would not touch their pensions, and he betrayed them.”

In response, Christie’s campaign shot back a quote from Paul Nunziato, statewide co-chair of Christie’s Career Public Safety for Christie Coalition, and the President of the PANYNJ PBA.

“Governor Christie has stood shoulder to shoulder with public safety officials and led with bipartisan solutions to put our families first, give law enforcement the tools we need, and worked in partnership to keep our communities safe. Senator Buono has been divisive and lacks a vision to keep our state on the right path,” Nunziato said. “We need someone who will continue to work across party lines to get the job done, not someone who puts politics first as Sen. Buono has throughout her career.

“Without a doubt, the Governor is the right person to lead our state for the next four years. That’s why law enforcement leaders and rank and file officers up and down New Jersey are resoundingly standing with him in this campaign.”

Democratic Mayor Frank Gambatese was absent from Buono’s event. The brace of superior officers stood behind Buono in sunglasses and folded arms.

“The governor has time and again chosen to leave working class families behind,” said the Democratic nominee for governor, lagging by as many as 30 points behind incumbent Republican Christie.

“Trickle down Mitt Romney supply side economics in a  fleece,” she said of the governor.

Veteran NJTV Political Correspondent Michael Aron breached the grimness when he asked Buono about the state of the campaign.

“It’s no different than two days ago when you asked me,” said Buono. “After the special election, where this governor wastefully spent money, there has been real energy infused into this campaign. I’m going for a run tomorrow night with Cory Booker. People are waking up and saying, ‘Oh, my God, there is another election.’”

“The Governor saved the pension systems with bipartisan reforms that Sen. Buono lacked the ‘courage and temerity’ (her words) to fight for,” said Christie spokesman Kevin Roberts. “She chose politics and posturing for her gubernatorial campaign over solutions to shore up the systems for the future and to save taxpayers money.  She still has no solutions except to raise taxes even higher to pay for these ballooning costs.

“In sharp contrast, Governor Christie fought for landmark reforms and brought members of both parties together to get them done, and has provided the largest state payment to the pension fund in New Jersey history.  The Governor’s willingness to step up and address these challenges directly, honestly, and with both parties has earned him broad law enforcement support in this campaign.” 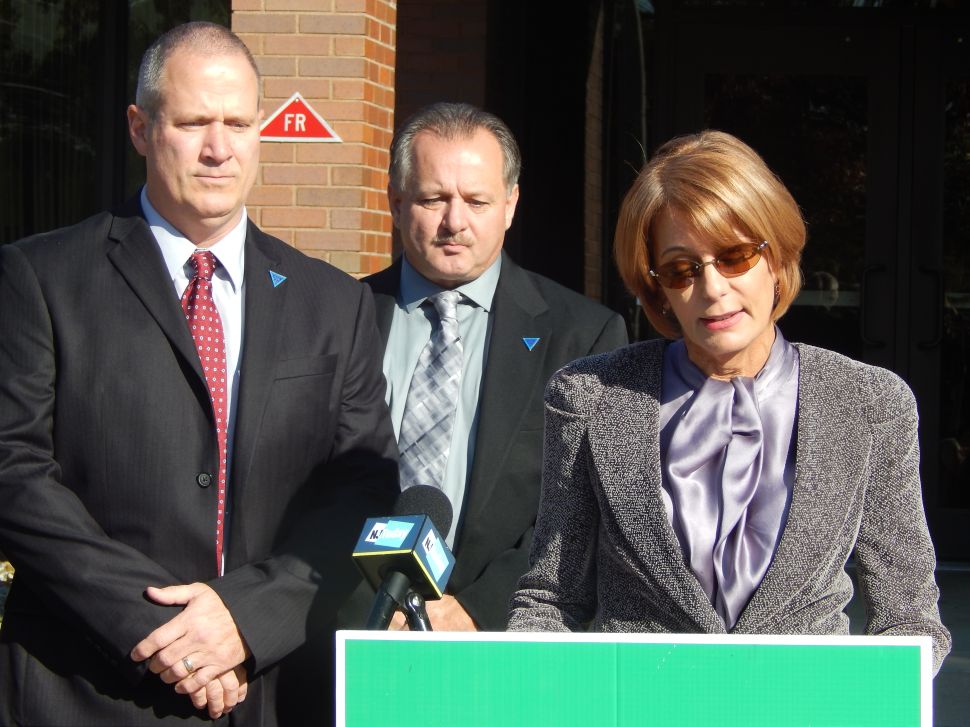