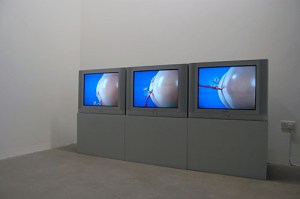 The Frieze Art Fair opened in London today, and Tate curators and other guest selectors were on hand, snapping up work for Tate’s collection by Terry Adkins, Christina Mackie, James Richards and Sturtevant, thanks to the annual Outset/Frieze Art Fair Fund. The fund offered up a not-inconsiderable £150,000 ($240,000) in spending money this year.

The committee that selected the work consisted of Tate curators Ann Gallagher, who is head of collections for British Art, Frances Morris, head of collections for international art, Tanya Barson, curator for international Art, and Clarrie Wallis, curator for contemporary British art, along with two guests: Tobias Ostrander, the chief curator of the Miami Art Museum, and Beatrix Ruf, the omnipresent director of the Kunsthalle, Zurich.

Details on the works—and the galleries making the sales—follow below.

James Richards (b. 1983)
Not Blacking Out, Just Turning the Lights Off, 2011
Double channel video installation
Commissioned by Chisenhale Gallery
From Rodeo Gallery, Istanbul

(Image via Chelsea Space, London, which hosted a Sturtevant show earlier this year.)