MARLTON – During 2011 redistricting, the Democrats had a map that would have mashed Republican senators Diane Allen and Dawn Addiego into each other’s laps in what, for Democrats at least, would have amounted to the ultimate Burlington County gladiatorial spectacle.

But two stars on the rise in their respective parties in neighboring districts appear to be vying for the title of most promising future Burlington County politician: Assemblyman Troy Singleton (D-7), Palmyra, of the Democrats and Assembly candidate Maria Rodriguez Gregg of Marlton, an LD8 Republican.

To stay on what others see for him as a statewide glidepath, one of them has to get through a fight on Nov. 5. The other is gliding into districtwide office but still showing a strong work rate in advance of Election Day.

The most riveting contest this year in Burlington pits LD7’s tag team of Assemblyman Herb Conaway and Singleton against a pair of Republican challengers (Jeff Banasz and Anthony Ogozalek) encumbered by Gov. Chris Christie’s seeming lack of interest and the deep impact name ID of the incumbents in a district that on paper shows a registered D to R advantage of 52,033 to 28,424 and 56,412 unaffiliated voters.

“It’s not fair to compare the votes Singleton will generate this cycle to Rodriguez Gregg because the districts are too different,” said one source close to the Democratic ticket. “Troy Singleton is in a real contest. I don’t think anyone believes Maria will lose as a Republican running in the 8th on a ticket with Chris Christie.”

The 40-year old Singleton has heard the words “rising star” attributed to himself probably going back to when he worked for his mentor, Speaker Joe Roberts. When PolitickerNJ.com looks at the latest “Jersey Man Magazine” profile of the Democrat the words are not immediately visible, until a glance past the text reveals the splash headline: “Run, Troy, Run, this Rising Jersey political star believes in making a difference.”

On Saturday, the dynamic Singleton faced a roomful of women at a house party in Moorsetown. The Carpenters rep by trade had everyone’s attention as he spoke of his commitment to equal pay for equal pay for equal work, and acknowledged his personal growth on the issue of same sex marriage from Catholic altar boy to gay rights advocate.

He mentioned his ability to work across the aisle with Christie.

“I am the legislator with the most bills signed by the governor that have my name on them,” Singleton said.

Everyone liked Singleton, but there was a little uneasiness among the women on the topic of Christie, and then one of them said it. “How do you get them to be real?” a woman griped, and specified – “Christie appears to be getting more and more bombastic. But I guess we’re stuck with him.”

In a statewide environment in which Christie leads Democratic challenger Barbara Buono by as many as 30 points in some polls, Singleton pivoted from the Republican governor to take a swipe at the Tea Party and gong those far right federal lawmakers unable to reach consensus.

Among hardcore Democratic women deeply angry with the governor over his pro life views, Buono’s name never entered a conversation anchored by Singleton’s ability to work effectively across the aisle with Christie.

Singleton later clarified that he staunchly backs the Democratic nominee for governor.

“I learned how to build cordial government relations with people from Joe Roberts,” he said. “Yes, we work together, but there are some fundamental differences between the governor and me. I would say our main difference is on the earned income tax credit, which I support for the working poor and he does not. While we reach consensus governmentally, our differences still prevent me from endorsing him. When Barbara Buono gets into office she will enhance the work I do, and I make sure to deliver that message to the voters every chance I get.

“It’s a unique environment,” Singleton added of this election. “Chris Christie has a great personal connection to the voters, but I am optimistic folks will look at our races and value us for what we do.”

Singleton and his running mate have the added unique obstacle of running under popular incumbent Republican Senator Allen. The voter in LD 7 will see Republicans Christie and Allen before he or she gets to recognizable brand names Singleton and Conaway.

Late in the game, Christie does not appear to be diving head first into a district-wide showdown with Singleton.

This week the governor has a scheduled campaign stop in Mount Holly, which is located in the neighboring 8th District, where Republicans have positioned their own comer, Rodriguez Gregg.

The Republican-leaning 8th has 39,209 Democrats against 35,848 Republicans, with the bulk of 59,873 unaffiliated voters leaning R.

While Singleton was at the house party with his running mates on Saturday, Rodriguez Gregg, a roller derby competitor, was on solo door-to-door duty in her hometown. “I don’t want to take anything for granted,” said Rodriguez Gregg, the running mate of state Sen. Addiego and Assemblyman Chris Brown.

“What I am finding is people have concerns about their taxes but they are also happy with their representation in Trenton,” added the Republican candidate as she came down one driveway and sped walk up another.

“What two people, two consenting adults do, is their business, and I completely support it,” she said.

While personally opposed to abortion, she doesn’t see the use in trying to reverse Roe v. Wade at this point. That won’t be her issue if she gets to the legislature. Daughter of veterans, and the wife of a veteran, she intends to make veterans’ issues her focus when and if she gets to Trenton.

She weathered a Tea Party Primary, and in this Republican district always under threat of attack from the right, she doesn’t see the Tea Party as the prime source of federal government gridlock.

“I consider myself a Republican,” said Rodriguez Gregg. “I don’t always agree with the Tea Party but they bring up valid issues. I don’t like the idea of scapegoating any one party or group.”

Burlington County GOP Chairman Bill Layton said of his new candidate, a volunteer who has never held elected office, “She has a unique background and strong character traits. She will be a thoughtful assemblyperson and she will be a strong assemblyperson. She’s going to someone who’s going to be around for a long time.”

Speed-walking up another driveway and toward another door, Rodriguez Gregg considers a question about Buono, the Democratic nominee.

Does she feel bad as a woman to see Buono struggle against Christie?

“I think in many ways she is on the wrong side of the issues,” said the Republican Assembly candidate. “She doesn’t have a plan. Her education plan was panned. I don’t think Barbara Buono is proposing a good solution for the state, but I do respect her. I respect her for running and putting herself out there the way she has.” 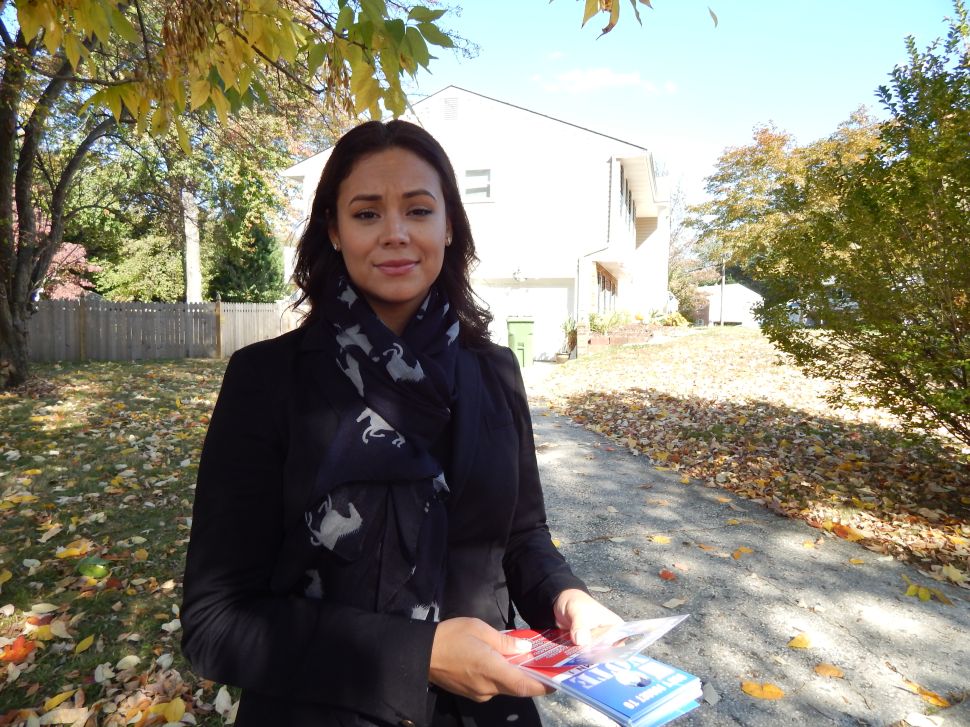