“Would you like a piece of bread?” Felix says, as if we had just been seated at a restaurant and etiquette required asking this before he could butter a roll for himself.

But Felix and I aren’t flanking a breadbasket at a table for two. We’re on the lower level of NYU’s Elmer Holmes Bobst Library near Washington Square Park during the first week of fall term. For the last seven months, Felix has called this glorious, 12-story structure designed by Philip Johnson home, which is not to say that he’s a nerdy graduate student solely focused on scholarly pursuits, but that the 30-year-old, whose strong features and goateed look belie a gentle demeanor, has actually been living here.

“I keep a loaf for snacking,” Felix explains, then guides me to a wall of lockers.

For a grand total of $225 per semester, Felix rents nine small cubbies, which he has named according to their contents: two “closets” (one for dressy clothes, another for casual), a “desk” (laptop, DVD player, several Ziploc bags filled with pens and pencils, stamps, and important documents), a “nightstand” (hairbands, bottle, snacks), perhaps the most ironic “bookshelf” in existence, and a “bathroom” (toothbrush, deodorant, etc.). For easy access to his belongings, he has memorized every combination.

“Got any peanut butter? Or honey?” I ask.

A sigh. “You have to keep things simple, Mélanie.”

When it comes to living off the land of a library, there’s apparently a lot to learn. Luckily, I have a willing tutor in Felix, whom I first met at a Soho café weeks earlier.

After overhearing me negotiate the “proposed” price hike upon which my lease renewal would be contingent, and watching me gesticulate wildly in the specific, desperate way a failing argument gives rise to, even over the phone, Felix introduced himself. Within minutes, out of pity, guilt or over-caffeinated delirium, he confessed his unique residential situation. Then, in response to my skeptical chuckling, he offered to check me into Bobst as his guest (students are issued two passes for outside visitors each month upon request). Reasoning that a library peppered with security cameras is the last place a serial killer might lure his victims, I accepted, and we scheduled what would be my first platonic sleepover in a decade.

In an email thread titled Back to School Slumber Party, I learned a bit more about Felix, who, as the son of prosperous doctors, has never exactly qualified as a pauper. Felix is an alumnus of Lehigh University and an elite prep school before that. By his account, “NYU has been paid for,” in addition to the rest of his education. The decision to live at Bobst, Felix confirms, beneath two key pointers—that I “bring a backpack to fit in” and “wear a sweater for protection against heavy air conditioning”—wasn’t borne out of financial necessity so much as convenience and disdain for the high cost of living anywhere near campus.

As a tenant who watched the cost of her Thompson Street rental near Bobst increase by 41 percent between 2009 and 2011 (I had a good deal to start, but come on!), I can understand Felix’s frustration. Ranging between $19,708 and $25,354 for the academic year, even NYU-sponsored housing for graduate students is pricey. Meanwhile, admission to the library is free, as is access to the state-of-the-art Coles Sports and Recreation Center two blocks away (i.e. reasonable walk-to-shower distance). Somewhat surprisingly, the Library Conduct Code, which forbids smoking, “mutilating” materials and consuming “aromatic foods” outside the snack lounge, doesn’t address long-term hibernation. In fact, back in 2004, when school authorities caught on to the fact that Steve Stanzak was residing permanently at Bobst (and blogging about the experience) because he couldn’t afford his education otherwise, they rewarded him with a complimentary dorm room.

By spending the night at Bobst, I intended to find out everything I could about Felix’s “storybook” lifestyle. If library living were a viable option, prospective students across the nation might cross “exorbitant cost of living” off the “cons” list of attending school in NYC. Plus, there must be hoards of would-be tourists willing to crash on a couch amid Red Bull-gulping twentysomethings cramming for exams in the name of vacationing on the cheap.

Fueled by a few slices of soft white bread, Felix invites me on a proper tour. We pass a Mac thief’s dream of a computer lab, a pin-drop-quiet study lounge and a bustling cafeteria before climbing the stairs to the mezzanine.

“Bobst’s lower two levels are always open, but the other 10 floors are closed from 1 a.m. to 7 a.m.,” Felix says, as I sprawl across a comfortable couch tucked in a corner of the lobby. “In other words, that’s a midday-catnap station only.” Gazing north from Bobst’s grand atrium, Felix hesitates before adding that the floor-to-ceiling aluminum barricades lining the upper floors were designed to look like a digital waterfall—and to prevent suicide attempts after three students jumped to their deaths during the aughts.

In addition to several other napping spots assigned various degrees of coziness, Felix shows me the media center, which is stocked with an impressively vast collection of films, and a bathroom on the eighth floor with especially low sinks conducive to impromptu hair-washing. He also points out a fellow squatter in a faded yellow T-shirt who, thanks to dyslexia, has access to “the disabilities room,” where he reportedly hooks up with girls.

I smile, imagining the ultimate college achievement: sex in the stacks. Then again, how many times can you check that one off the list?

“I have a friend with a spare room who lets me stay over if I leave $20 on the counter.”

“And you wouldn’t move in permanently at that rate?”

“Nah. Here I’m surrounded by people, but I’m also pretty anonymous. Not having to bullshit—even with a roommate who’s a friend—is a plus.”

For Felix, library life fosters focus, which has translated into the best grades of his life (GPA: 3.925). And showering at the gym has inspired him to work out more.

By the time Cozy Soup ’n’ Burger notifies us around 10 p.m. that our delivery order is outside, I’ve downed quite a bit of the Bobst Kool-Aid. What’s not to love about life in a beautiful, well-located building with free Wi-Fi and janitorial service? If the opportunity cost of living rent-free is forsaking a mattress, showering down the street and getting randy in the special needs section, so be it.

“I don’t even have to have keys,” says Felix, penetrating his satisfied smile with a ketchup-drenched French fry.

But as bedtime nears, the reality of curling up on two square-ish chairs sets in.  At 5’10,” I’m about Felix’s height, so space shouldn’t be an issue, but I’m not “a heavy sleeper,” as he describes himself. I’m also concerned about the lights, which aren’t shut off until after midnight in the side area Felix prefers come nighttime.

Only once we secure our top seating picks does it occur to me that there’s a limited amount of furniture and no generally accepted principle for reserving it. Though Felix claims he has never been reduced to “flooring it,” his nonchalance about the possibility suggests an advanced degree in adaptability.

After anointing me with an official NYU lanyard so I can wear my pass around my neck, where it will be visible to passing guards throughout the night, Felix puts headphones on. Ten minutes into the Woody Allen movie he likes to fall asleep to, he’s out cold.

Shifting from one position into the next within my seat-crib, I can’t seem to achieve anything close to tranquility. I take a brief stroll amid the late-night studiers before resuming the challenge of feeling at home in a strange place populated by strangers.

When a guard pokes me in the shoulder an hour or so later, I’m relieved, even upon meeting his grave expression.

“You are not allowed to be here,” he commands.

I am grateful to learn that outsiders are prohibited from staying past 1 a.m., even though the news shatters my dream of leading the black market trade of Bobst guest passes. As I tiptoe out alongside my escort in the haze of half-sleep, I count five other students dozing. I admire the economically sensible simplicity of their hoodie-encased comfort. Perhaps, like anything else, biblio living just takes getting used to—whether you happen to be well suited to exploiting the system, like Felix, or you have no other choice.

When Felix wakes around 6:45 a.m., he calls in response to my explanatory text and reports waking up among a group of 10 other students (most of them regular overnighters) still sleeping soundly. He’s already on his way to the gym to shower and workout before heading to class at 9 a.m.

So is Bobst livable?

Calling the library “home” has compelled Felix to study and exercise more than ever, while saving tens of thousands of dollars. But even considering the tempting financial incentive, it takes a master of improvisation to thrive in such a repurposed environment. For all those seeking affordable housing in this metropolis—aside from the nocturnal, who might still consider befriending NYU students just to strip them of guest passes—it might be wise to suck it up and shell out for fancier accommodations, like maybe a closet at Manhattan Mini Storage. 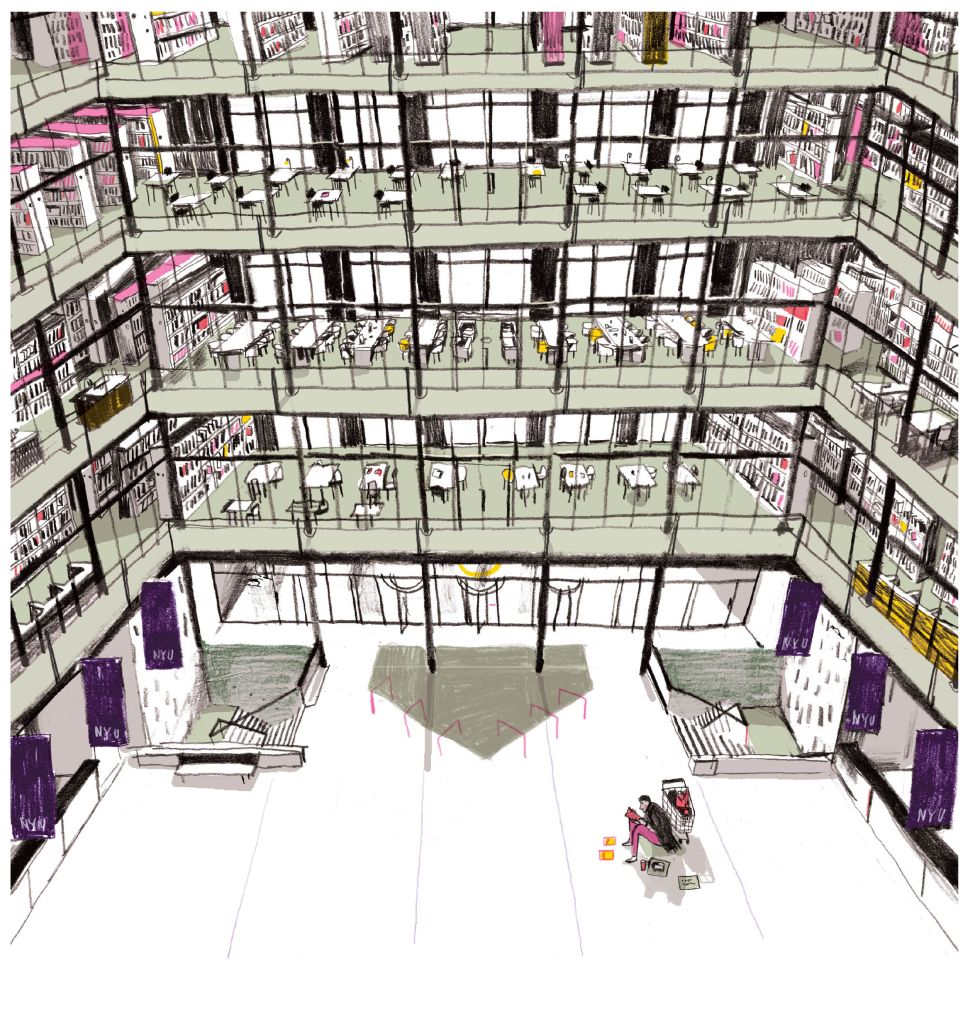