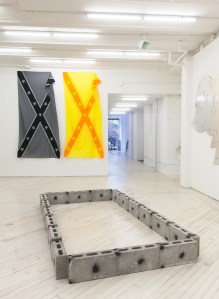 Tennessee–based artist Tom Holmes continues his improbably fruitful experimentation with the iconography and rituals of junk food and funerals in his second show at Bureau, which is the gallery’s first in its spacious new Lower East Side digs. Following forays into Trix and Boo Berry cereals, Mr. Holmes is onto Cheetos. Hanging on three walls are gigantic, foil-papered particle boards—we’re talking 14-feet-long each—that are shaped like the snack food’s logo and, come to think of it, gargantuan versions of the food itself. They surround cinderblock sculptures—grave sites, presumably. A rectangular one is adorned with the black dots of the brand’s guileful mascot, while a square one bears painted mule bones. Mr. Holmes introduces the “Dangerously Cheesy” into life’s most solemn subject—this is about as impudent as art can get, and funny in a let’s-not-dare-laugh kind of way. Some are likely to see in it an unrepentant, and perhaps juvenile, self-indulgence, but let Mr. Holmes’s strange logic take hold. Savor the way he connects and transforms objects in peculiar ways, as in two shrouds: black-gray and yellow-orange versions of Confederate flags that he has hung so that one top corner of each sags with an almost gallant air, as if it’s curtsying or tipping a hat a final time as a body is lowered into the ground. It’s one of the weirdest shows in town and worth seeing for that reason alone. (Through Nov. 10)