One day the artist Chris Burden was poking around eBay, looking at meteorites. “I was buying little ones and stuff, and all of a sudden I see this one, the biggest meteorite I had ever seen for sale,” he told me earlier this month at the New Museum, the day after a retrospective of more than 40 years of his art opened there. “And there was free shipping, you know?” He paused. “What, a 400-pound meteorite? Free shipping? I’ve never seen one that big. So I bought the meteorite with no idea what I was going to do with it whatsoever, and then I started thinking.”

Mr. Burden, who is perhaps still best known for Shoot, an art performance he did in 1971 in which he had a friend shoot him in the arm, has reached 67 with a stocky, vigorous build. His close-cropped hair and neatly buttoned shirt give him the air of a former boxer who became a physics professor but still hits the gym now and then. He speaks at a rapid-fire pace. “One day, I woke up,” he continued, about the meteorite, “and hmm…”

The sculpture he made with that space rock is now on the fourth floor of the museum. The meteorite hangs on one end of a long steel balance. On the other end is a working yellow 1974 Porsche 914. For years, the car was parked with the rest of his cars at his home and studio out in Southern California’s rural Topanga Canyon. Now it’s sculpture.

Why that pairing? “There’s just something—you know that Germans have been known for metallurgy since the Huns,” Mr. Burden said. “There was some sort of weird relation between the nickel iron in the meteorite and the Porsche. You know what I mean?” He continued, scrunching up his face and turning his voice into that of an old-timey storyteller, “A really good German craftsman, with a good hammer, could make a really great Porsche out of that meteorite. Clink, clink, clink, clink, clink.” He pretended to hammer away. “It’s a silly fantasy,” he laughed.

Perhaps, but it’s also a rich one. One could think of that sculpture, and others he has made over the past 35 or so years out of similarly dramatic materials, as precisely calibrated equations, each designed to produce in the viewer certain uncanny feelings.

Those twin cannons took more than seven years to make. It was tricky to find a fabricator capable of doing a 9,000-pound pour of bronze. (One ripped him off.) Eventually, he found a factory in England that does it the old way, using things like horse manure and peat moss. The cannons are identical to the originals except that they don’t have firing holes. “We didn’t want to get in trouble at customs,” Mr. Burden said, imagining the response of an official. “‘You are not allowed to import weapons of mass destruction!’” They imported them as urns.

These are awe-inspiring objects, and they have rarely been shown in the United States. (This show, organized by the New Museum Director Lisa Phillips, Associate Director Massimiliano Gioni, former Associate Curator Jenny Moore and Assistant Curator Margot Norton, is his first American survey in 25 years.) However, it remains a task to square them with the 54 trailblazing, often-harrowing performances by which Mr. Burden made his name in the 1970s.

There are superficial connections to be made in terms of materials. The Porsche harkens back to the Volkswagen he was nailed to, through his hands, in Trans-Fixed (1974), and the burly cannons are of course outsize versions of the handgun he fired at an airplane in 747 (1973) and his ex-girlfriend’s .22-caliber rifle that a friend wielded in Shoot. “It was very clean in its execution,” Mr. Burden has said of that piece, explaining why he still considers it a favorite, because he produced “a major work of art in such a small amount of time.”

His gargantuan sculptures take far longer to produce, but they share that clean, economical elegance, an aesthetic ethos that Mr. Burden says he picked up at the University of California, Irvine, where he studied with Robert Irwin, a leader in Southern California’s Light and Space movement, who was gradually making his art increasingly ethereal. “My education was right on the cusp of when Minimalism started to be at its zenith, so that’s what I was trained as, and that’s how I got into performance art, really,” Mr. Burden said. “It was a reductive attitude, to get down to the essence, to boil away the excess, the superfluous.”

During his education, he grappled with the differences between two- and three-dimensional art. “Sculpture you have to walk around. That’s a big difference, right? So you start to think, well, maybe the essence of sculpture is movement. Maybe that’s where the art is—in the movement, not in the object. That’s how I got to do performances, really. This reductive kind of thing.”

Mr. Burden’s exhibition extends to the New Museum’s exterior. He has mounted two tall aluminum skyscrapers on the roof and a 30-foot-long sailboat called Ghost Ship (2005) on the facade. They’re remnants of his initial plan for the show: to build a version of a city he calls Xanadu on top of and around the museum using his art, including model skyscrapers, lines of lampposts and other projects. The interior was to remain empty. Engineers produced preliminary studies, and he said, “I was pleasantly surprised that the building could physically take that.” The problem was the financing. “I realized, wait a minute, this is a $6-to-$10 million project at the very least, and I thought, you know, bottom line, I don’t think Mr. Gagosian”—his dealer—“is going to pay for that. Right?”

But the sixareen fishing boat that survived that shift in plan is no simple cast-off artwork. It’s an operation vessel, self-guided by GPS, and made an unmanned 400-mile journey in the North Sea a few years back. “It’s still symbolically some sort of escape vehicle,” he said.

Mr. Burden has sailed his entire life. He picked it up as a child in Boston. (“I think I was always fascinated by sailboats as a kid, because my dad said, you know, that it’s possible to sail upwind.”) In a 1973 performance B.C. Mexico, he piloted a kayak to an island south of the border, where he remained in sweltering heat for 11 days. This new boat, commissioned from expert ship builders, is part of a long-running quest.

“It’s always been my dream to be able to make a sailboat that you could dial in the latitude and longitude, push it off the dock, and it would sail there automatically,” he said. Ghost Ship still requires its sails be handled by remote control, which is a tricky business; it’s not quite completely self-sufficient.

His ideal boat would require no diesel fuel and have no labor costs. It’s a marvelous thought: one of man’s earliest inventions piloting itself. “I think it’s theoretically possible,” Mr. Burden said confidently, mentioning articles he has been reading about 3-D-printed catamarans. “It’ll happen someday.” 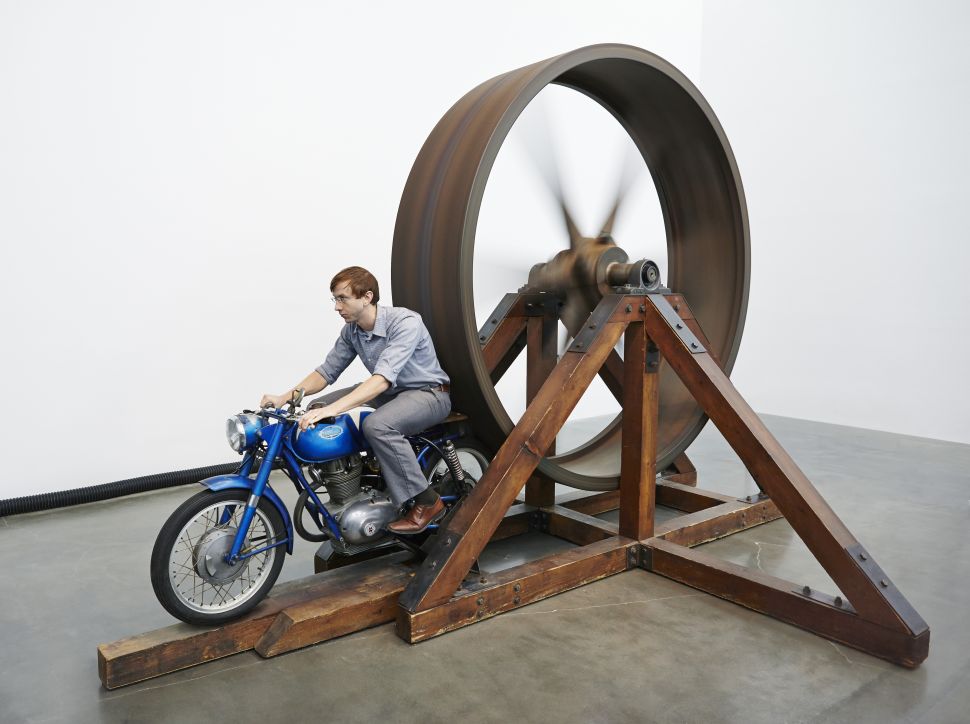