SOUTH JERSEY – That GOP squall Senate Minority Leader Tom Kean (R-21) wants would hit down here amid the inlets, sand stretches and docks on Nov. 5th, or so it would appear, but for Democratic incumbents’ staunch messaging of bipartisanship with Gov. Chris Christie, distinct name brands and shock and awe independent expenditure artillery.

While Christie has stayed away from making public appearances with battleground Republicans in key South Jersey firefights, Kean has run headlong into South Jersey’s throne room and challenged the dominant figure on the landscape: Senate President Steve Sweeney (D-3).

Democrats built an impenetrable map during redistricting, argue those who say Sweeney and his great hall of South Jersey senators can’t be beaten. But even as they acknowledge the toughness of defeating a rock-jawed politican who has his own bypass in LD3, the most pragmatic GOP operatives around a very enthusiastic Kean say they can’t ignore the disparity between Christie and his Democratic opponent in the top of the ticket contest.

“Kean has put us in position – just in case,” said a source.

On Sunday morning, a band of Republican South Jersey brothers and their leader, attorney Nikki Trunk, went door-to-door in Woodstown in the heart of Sweeney’s district.

Trunk’s challenging Sweeney in a once Republican district that the ironworker Senate president muscled into a 2-1 on-paper advantage for registered Democrats. The Senate Prez has racked up double digit wins with relative ease the last two cycles, and this time, Sweeney – and the independent expenditures – have laid heavy fire on Trunk early, in not dissimilar fashion from Christie’s out-of-the-gate elephant gun stylings on Buono.

“They have been unable to campaign against our records so they’re throwing mud against the wall to see if it sticks with the general public,” he added, referring to the ads against Trunk funded by independent expenditures, specifically the heavy-handed labor PAC Funds for Jobs Growth and Security.

It’s a bruising barrage by the looks of it, as Trunk has had to spend time fending off what she says are preposterous attacks rather than training her own message on Sweeney.

Christie was set today to make an appearance in the district, the first, by the reckoning of the LD3 challengers. To date, “He has not come down here,” said Wallace.

There were some gritted teeth in the small circle of South Jersey Republican allies, and PolitickerNJ.com watched for facial tics, but Wallace grinned back. “It doesn’t change our campaign,” he said. “Our job is to let people know how dismal their (the LD 3 incumbents) record is. Period.”

If LD 3 has the look of Republicans’ trying to pin down Sweeney while they go more aggressively elsewhere, neighboring LD 1 has the appearance of a concerted Republican salvo. Registered Republicans out-number registered Democrats 38,946 to 32,815 in the mostly unaffiliated district dominated by GOP leadership at the local level.

Veteran state Sen. Jeff Van Drew (D-1) occupies the top of the ticket, and he’s trying to fend off a challenge by businesswoman Susan Adelizzi-Schmidt.

There was a filling station at the edge of a scrub pine forest along the border of LD 3 and LD 1 and a vehicle idling nearby. Pickup truck. Window down. Heavily tattooed arm on the door frame. Porcupine-sized beard behind the wheel.

PolitickerNJ.com asked for a specific street name and whatever the driver said got stuck between mouth and beard but it sounded like “Bunk,” and when he heard the question for clarification the driver replied, clearly this time, “Buck. The name of the street is Buck.”

Buck led to Elk Township, and there was a pattern emerging of some kind before 55 came up suddenly and the car turned onto the highway, bound for Cape May.

In Cape May Court House, Adelizzi-Schmidt settled into a booth in the local diner.

“He has appeared in the district, in September, and I spoke with him,” Adelizzi-Schmidt said of the governor. “He was very supportive.”

Bitter about it? Adelizzi-Schmidt smiled without a trace of it.

“Each candidate has to do their own hard work and build their own brand,” the candidate said. “For me to rely on anyone else but me – that’s not me. You have to get out there and work as hard as you can. I have a big hill to climb. That’s all right. I like big hills.”

The race is bitter: an independent expenditures bloodbath on the air waves and everyone’s aghast over what the indies are saying on his or her behalf.

“Obviously, we are not allowed to coordinate with them,” said Van Drew.

Republicans and their allies have laid a steady diet of punishment on Van Drew’s running mate, Assemblyman Nelson Albano (D-1), who tried to punish a state policeman who stopped him and is now the subject of an ethics inquiry.

For Adelizzi-Schmidt, the fact that Albano used letterhead from Senator Van Drew’s office underscores how the senator must also take responsibility for what the challenger says was Albano’s improper use of power following the traffic stop.

“He says he had a bad day, but then six days later he falsified what went on,” she said.

Like Adelizzi-Schmidt, Van Drew is a Christie fan, and bullet points initiatives he has worked on with the Republican governor, including the saving of Vineland Developmental Center.

“A good man,” he said of the governor as he and his LD 1 mates began walking up Washington Street in downtown Cape May as part of Sunday’s local parade festivities.

It was a Halloween Parade. Superwoman stood on the corner and waved at the Democratic incumbents.

Assemblyman Nelson Albano was at one elbow, Assemblyman Bob Andrezejczak at the other.

Van Drew has implemented Iraq War hero Adnrezejczak as a cudgel against the GOP’s insistence that Albano’s ethical lapse mortally wounded all three men, starting with Van Drew. “When you’re an elected assemblyman and you use Senator Van Drew’s letterhead and you lie and try to get a patrolman punished – that’s a problem,”  Adelizzi-Schmidt said.

PolitickerNJ.com asked Albano how it felt being the ticket’s favorite GOP bulls-eye.

“I made a mistake, asked for something I shouldn’t have asked for. I apologized publicly. I apologize again. …I had a bad moment,” he said.

Van Drew built his own brand down here as a conservative Democrat, and he doesn’t look worried as he intones, “Happy Halloween” to a group of young people. The Fund for Jobs, Growth and Security is pouring money into the district and checking the negs on Albano with its own dismantling of Adelizzi-Schmidt.

“I was against the Citizens United decision to begin with,” Van Drew said of the federal Supreme Court case that reinforced super PAC contributions to campaigns made independently of candidates. “There’s too much money in politics.”

But, he noted, Americans for Prosperity (AFP) is going after him, and this, right now, is the field of play.

Adelizzi-Schmidt dismissed the Fund for Jobs, Growth and Security’s ad as a cookie cutter debacle that “bolsters my name ID.”

“I go to talk to voters and they tell me, ‘Susan, you’re here!’” said the GOP candidate.

“These are Corzine Democrats dressing up for Halloween,” said the minority leader. “This is just a temporary trick for Halloween.”

But there was Van Drew, with an Iraq War veteran at his side, again apparently effortlessly to the right of his opponent a day before the first same-sex couples marriages occur on the state on the heels of a judge’s ruling.

Adezzi-Schmidt said she supports marriage equality in this conservative district.

Talking bipartisanship, talking Christie love, driving the message, Van Drew took the question on the subject in stride. “My position,” he acknowledged, waving to the throng up and down Washington, “is the same as the governor’s.” 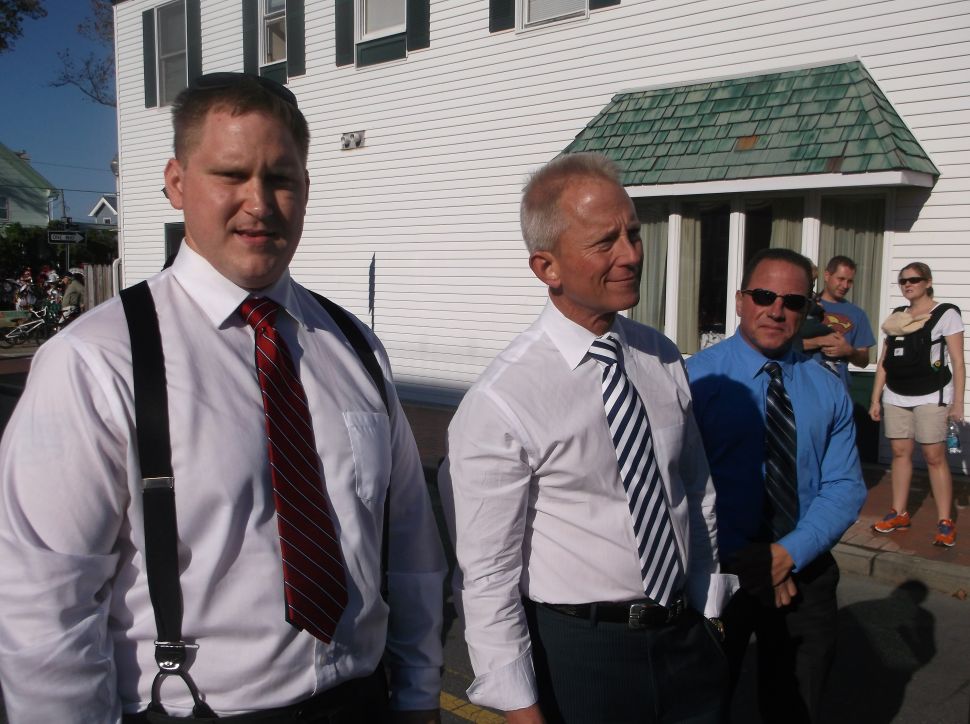