In a Gov. Chris Christie post-election world, the New Jersey Senate looks a lot different on Nov. 6 than it does now.

Let’s presume the governor and his campaign are onto something when they disclosed Tuesday that the popular incumbent is investing “significant” resources into three legislative races for the final week of the campaign. The races in the districts are close, Christie’s campaign argues, and polling suggests support from the governor could put the GOP candidates “over the line.”

Democrats disagree. They say the Republican governor is putting on a good show in the final stretch after focusing much of the election season largely on only his own race.

Regardless, let’s presume the scales tip in Christie’s favor and Republicans grab three seats in the state Senate.

Currently, the Senate make-up is 24 Democrats and 16 Republicans. Under this (however likely or unlikely) scenario, it’s 21-19 with Democrats still on top, but the addition of three GOP lawmakers in the upper chamber, and the presence of Christiecrat state Sen. Brian P. Stack (D-33) and state Sen. M. Teresa Ruiz (D-29), make a drastic shake-up more plausible.

Here is a look at possible changes to the command structure in the state Senate:

If Senate President Steve Sweeney hangs onto the position when lawmakers take a leadership vote just days after the election, Sweeney’s close relationship with the governor gets even closer.

In the weeks leading up to the November election, Sweeney and Christie shared a lot of laughs. Both men appeared alongside each other on the campaign trail on numerous occasions and the popular governor didn’t pounce on any of Sweeney’s South Jersey territory during the race. None of his targeted districts are in South Jersey. They swapped stories, posed for the cameras and shook hands. Additionally, both told reporters and supporters that that worked well together over the past four years – bipartisanship was the name of the game, they said.

Well, under a 21-19 Sweeney Senate presidency, the Democratic lawmaker would have to consider working even closer with the Christie agenda lest the governor pull friendly Democratic senators closer to his side.

The relationship between Sweeney and Senate Minority Leader Tom Kean Jr. has been, to say the least, tense of late. Even before the election really kicked into gear, Kean and Sweeney were at it on the Senate floor when it came time for the Democrat’s gun bill to clear the upper chamber for a vote. The tension just got worse between then and now with Kean putting a significant amount of time and energy into state races. (Did we mention Sweeney’s campaign recently took his colleague to court over allegations of improperly funding a Senate campaign? Yeah, the relationship is a tad icy.)

But Kean supports the state races as best he could well before Christie’s campaign announced it was focusing attention on the three districts. His work doesn’t go unnoticed and he’s awarded a promotion of sorts. A Democrat friendly to Republicans gives the GOP just enough of a bump to bring the Senate back to the days of a co-Senate presidency.

3. Stack or Ruiz assumes the role of Senate president

The two lawmakers shouldn’t be underestimated if the Senate party-gap narrows.

Consider for a moment Ruiz’s ties to Democratic power broker and Essex County Executive Joe DiVincenzo. As the state Assembly readies to swap Joe D ally Speaker Sheila Oliver for the South Jersey-friendly Assemblyman Vincent Prieto in its leadership position, a 21-19 shakeup in the Senate could provide the North Jersey Democrat the opportunity to make gains in one chamber where he loses influence in another.

Hudson County isn’t without its own ability to throw its political weight around and one of the county’s organization cornerstones was built by Stack himself. The mayor and state senator is close to Christie and is known to get along with both Democrats and Republicans. Of course, while the likelihood of two Hudson County lawmakers assuming leadership roles in both houses is slim, Stack’s ability to strike a few deals under the right circumstances shouldn’t be completely discounted.

4. Stack or Ruiz shares the podium with Sweeney

And speaking of sharing, if Republicans snag the three additional seats in less than a week they would only need either Stack or Ruiz’s vote to make it 20‑20 in the Senate.

Republicans will have good reason to support either lawmaker for co-Senate president because a 20-20 Senate means Judiciary Committee co-chairs, Budget Committee co-chairs and so on. Stack has the support of the governor and of Republicans in such an equation, and if Sweeney were forced to swallow his medicine he may rather get it from a friend. A Stack-Sweeney partnership would alter the Senate landscape drastically (Christie Supreme Court nominations getting a hearing, anyone?) and much of the same thing could easily be said about Ruiz assuming the co-Senate president role. 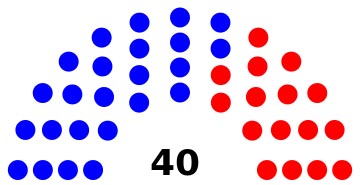