This coming Wednesday’s race for U.S. Senate started in ho-hum fashion, with insiders declaring Cory Booker the winner while heralding the arrival of no-hoper Steve Lonegan as someone who could supply entertainment value during an otherwise moribund election season.

Booker’s people appeared early to be the only ones un-amused.

They weren’t about to allow their candidate to play the straight man to what they saw as Lonegan’s coming movement conservative antics. Opting for a very light schedule of press avails, they took a kind of high road delight in being able to justify avoiding Lonegan.

A political advisor close to Booker on the night he won the Democratic nomination for U.S. Senate told PolitickerNJ.com, “He’s crazy,” referring to the winner of the Republican Primary for U.S. Senate.

The pronouncement came days after a staffer for Lonegan tweeted a picture of a map of Newark, supposedly a joke, which prompted even some of Booker’s most dedicated local adversaries to condemn the Newark mayor’s likely general election opponent as a harbinger of racist attitudes.

The tweet made it look from the beginning like Booker wouldn’t have to do much, other than to occasionally remind people about the tweet – and talk about children and what he wants to do as their advocate in the U.S. Senate.

But an indefatigable Lonegan began stringing together event after event, doing ready press avails wherever he went and accommodating reporters via conference call when they couldn’t make it in person.

He showed humor, as was expected, including presiding at a red carpet event at the Robert Treat Hotel with Donna Jackson and other Booker antis on the same night Booker bear hugged Hollywood hotshot Matt Damon at a West Coast fundraiser.

But he did more than just stage the theatrical set-pieces that Booker’s people anticipated.

He went after Booker.

He showed Booker no respect, claiming horror at the record he saw in Newark and refusing to apply a separate set of standards to the long embattled city.

A close Booker ally earlier this week admitted that the Democrat did not anticipate the tenacity with which their Republican opponent dove on top of Booker’s part-ownership of Waywire, and the settlement package he received from law firm Trenk DiPasquale, which did close to $2 million of business in Newark.

“That hurt us, and we didn’t react to it well,” the source said.

Booker’s people from the start saw the race as a chance not only to front their likeable and inspirational candidate, but to compare ideas, and trusted in Booker’s poll-tested, name ID-aided progressive views on guns, abortion, federal infrastructure improvement and federal distribution of disaster relief.

The former state director of the Koch Brothers’ Americans for Prosperity, Lonegan was opposed to the feds’ dissemination of Hurricane Sandy funding.

Team Booker figured that was just another easy jump shot.

If gubernatorial candidate Barbara Buono had a similarly optimistic view about blue state dynamics ultimately prevailing in a matchup with incumbent Republican Gov. Chris Christie, she lacked the money for a combat message.

Booker didn’t have that problem.

The money was flowing, as usual. According to a report in this morning’s Star-Ledger, he raised $11.2 million to Lonegan’s $1.35 million as of Oct. 4.

But Lonegan also welcomed contrast, as he embraced ways to make Booker look out of the mainstream, a tactic that included his holding a press conference in front of one of Booker’s former properties in derelict condition, then inviting reporters into his own tidy home in Bogota.

He harped consistently and repeatedly on the Newark mayor’s inability to get control of violent crime in the city, and refused to be captivated by Booker’s self-chronicled Twitter heroics on Brick City’s mean streets.

He seized on polling trending the wrong way for President Barack Obama when the president failed to sell his Syrian air strike message.

When statewide polling showed Lonegan cutting a 27-point lead in June down to 13 this month, the anti-abortion, pro-Ted Cruz, pro-Rand Paul Republican began taking on a consistent image of tenacious underdog, and building sympathy in what for Booker were all the wrong places.

When PNJ said the polls did show Booker ahead in a blue state, the source soured. “I meant Lonegan,” he said. “I love the guy.”

But others occupying a more progressive wing of the party chafed under gay-baiting suggestions by Lonegan – and most recently Lonegan political strategist Rick Shaftan – starting with the candidate’s wondering out loud about Booker’s recreational supports while admitting to his own preferences of cigars and scotch; and ending with Lonegan firing Shaftan over the latter’s comments about Booker to a Talking Points Memo reporter.

“It was just weird. I mean, to me, you know, hey, if he said, ‘Hey, you got really hot breasts man, I’d love to suck on them.’ Then like, yeah, cool. But like, he didn’t say that,” Shaftan said, referring to Booker’s twitter exchange with a West Coast stripper. “It was like kind of like, I don’t know, it was like what a gay guy would say to a stripper. It’s the way he was talking to her. It’s just like like there was no sexual interest at all. I don’t know. To me, if I was single and you know like some stripper was tweeting me, I might take advantage of the perks of the office, you know?”

Lonegan insisted on seeing the upside of his own contrasts with Booker, while Booker allies quietly welcomed the shutdown of the federal government as a plus for their candidate and confirmation of what they said from the start: Lonegan, and others like him, are crazy.

Asked to size up the race in spite of every effort by Lonegan to make it look like a Booker meltdown, a staffer of the Newark mayor’s said Hudson was at peace, Palin represents New Jersey, according to Lonegan, and Shaftan was obsessed with breasts. “What could be better?”

Convinced from the beginning that the timing of the election on a Wednesday in October rather than the usual Tuesday in November made the contest a base election, and trusting in his ability to motivate movement conservatives, Lonegan liked his chances heading toward Wednesday.

Booker’s father died last week, and the candidate went back to his hometown of Harrington Park for a campaign run, which by the reckoning of his closest campaign allies, was a far heavier event than others criticized in the media and elsewhere as substanceless jaunts and excuses simply to get away from Lonegan.

The mayor’s allies were convinced the polling shows them at least ten points ahead but most, when asked, concede that anything less than a 20-point margin will embarrass their candidate and embolden other Republicans for next year’s regularly scheduled U.S. Senate election – that is, unless they think twice about facing Lonegan in a GOP Primary. 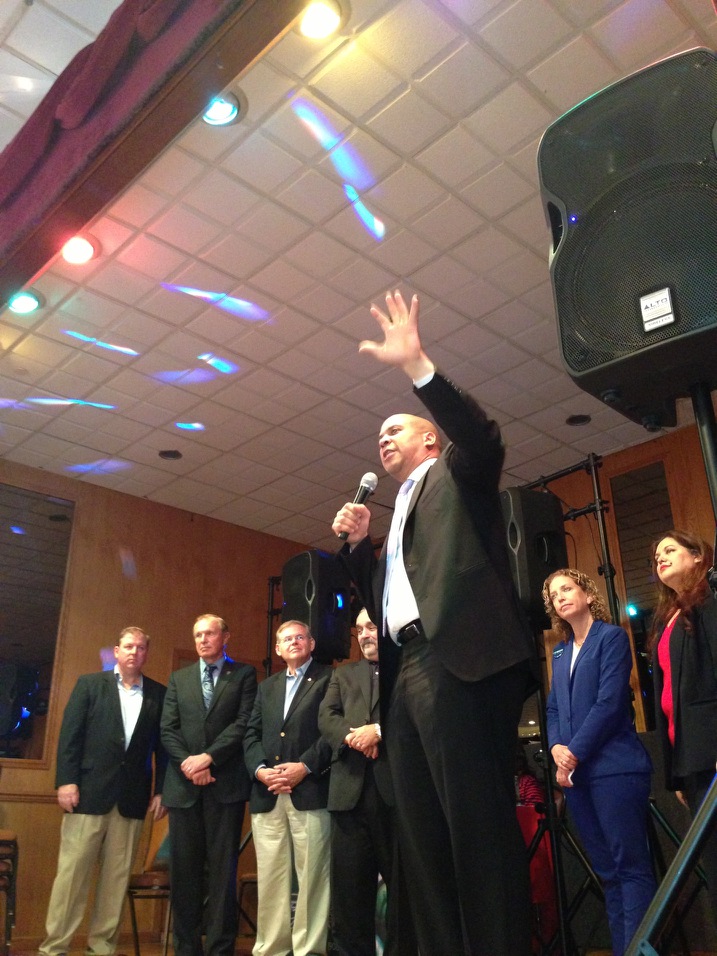