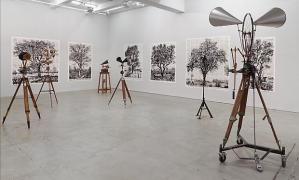 A text composed entirely of titles, a history that refuses to be past and the unquenchable yearning of the recto for the verso. Construction paper fills the screen at the beginning of William Kentridge’s astonishing and devastating new animated video. On a seamless palimpsest of pencil lines and disappearing smudges rest a black book and a short, red pencil. The artist’s hands, his right middle finger stained with black ink, reach in to open what claims, on its pasted-in title page, to be a “Cyclopædia of Mechanics” but is revealed, once open, to be a three-column dictionary. We hear a sad, simple round of repeating chords, played on the piano by Neo Muyanga. A brief, foreshadowing glimpse of the pages’ headings, “Nameless—Namely—Narcotize,” and then the video’s title appears in large, sans serif letters floating over a page headed “Ne’er Do Well—Negro: 2nd Hand Reading.”

Europeans settled violently in Africa, black typewriters, corvid scavengers and drawing with a brush and ink. Areas of accidental overlap in language, where a single term, thanks to some older metaphor now faded into the background, can be used to mean two things at once. Tenderness, injustice, helplessness, despair. Stripping away the context from a knot of doubled meaning until it means nothing but itself—but that, even more intently.

The gallery’s front room is filled with devices assembled from turntables, Singer sewing machines and antique wooden tripods, each waiting until a hand turns its handle or foot pumps its pedal to begin singing vocal music through a metal megaphone or silently waving a white flag. Despite their mechanical construction, these figures are really made of words, and looking down on them from a grid of torn-out book pages is a three-and-a-half-foot-high, India-ink crow. Because each of the pages was drawn separately, this crow fits together only roughly, with little jogs and overlaps. A herald of death that can also pick locks, the power of shapes to emerge from disparate dumb pieces and the persistence of gaps that can never be bridged. A dozen other patchwork drawings of massive trees are adorned with phrases: “News of Death Is Never Untrue” or “Productive Mistranslation.” From the crow’s mouth hangs a slip of paper that reads, “Whichever Page You Open, There You Are.”

As the pages of Second-hand Reading flicker past, Mr. Muyanga sings movingly, in Sotho, about a South African police massacre. The video’s mechanism doubles its meaning: Each stop-motion frame uses a different page of the dictionary, which then appears just long enough to be recognized as individual but not long enough to be held onto. Other phrases appear on recto or verso in alternation with the artist’s animated drawing of himself. In his usual black pants and white shirt, Mr. Kentridge walks steadily in place while getting nowhere, walks directly over a series of side chairs or stands and looks down thoughtfully. “Performing the Meaning’s Absence,” “Thinking on One’s Feet,” “Whichever Page You Open, There You Are.” We ask ourselves what makes us human, what it means that we live and die, when it’s the question itself that defines us and our lives couldn’t mean anything more or better than themselves. But our questions lose none of their urgency for knowing this.

After a burst of shapes in transparent colors, the words “So” and “When,” another ampersand and a black Malevich cross transformed by the addition of a dash into a plus sign, the book proposes, “Let the Drama Begin at the End: Start With the Death of Othello & Desdemona.” Is it an act of hope or of despair to recognize that nothing is ever over? Mr. Kentridge’s drawing of himself is joined by a black man in white pants and a dark jacket, with dark bandanas tied under his knees. He runs in slow motion, seeming to levitate for a moment at each apogee. Scenes of the South African bush, marked with red power lines, unfurl across both pages. Two dancers, sometimes female, sometimes male, their breasts marked with black crosses, wave white flags marked with a telegraphic dot and dash. A few gestural blots of ink double Mr. Kentridge walking, and typewriters, crows, Moka coffee pots, megaphones, globes, Malevich crosses and all of Mr. Kentridge’s other totemic double stand-ins for the prototypical human being flicker past rapidly. A leafy tree, verso, and a man carrying an oil drum, recto, each rotate to become a man with drum, left, and tree, right, and then continue rotating to resume their original forms. (These and other perpendicular doubles are repeated in bronze, a series of nine forming a sculpture called Rebus.) Two conical megaphones become two bowls of fruit. The dancers fade into dancing trees. “A Grammar of the Word,” “A Grammar of the World” and “A Grammar of the Wound.” One of the dancers writhes on the ground in stroboscopic agonies of death. “A Constructed Invisibility.” The dancer’s dead body becomes the ground. (Through Oct. 26)