An untitled painting by Wade Guyton in ‘Empire State’ at the Palazzo delle Esposizioni in Rome in April. (Photo by Gabriel Bouys/AFP/Getty Images)

I was recently booked on a same-day, round-trip Eurostar train to Paris to view two works on behalf of clients: a Wade Guyton, whom I exhibited in 1997 (unfortunately this was before he owned an inkjet printer) and Christopher Wool, whose work I completely missed the boat on (worse still, I put such thoughts in writing in 2006, predicting doom and gloom for his career and his market). A friend had kindly volunteered to show me the Wade work as he was not himself interested at any level, having collected Cy Twombly and Agnes Martin at more sensible prices.

When I initially showed Wade, from what I remember (I can’t find the little slides we once used to document these things), he did an installation that involved office supplies from Staples, which might have even ended up on my desk.

I’ve heard people ask, “Why the Xs and ‘flaming Us’ in Guyton paintings?” I’d venture that the artist doesn’t have an altogether convincing explanation himself, other than that they nicely fill out canvases while simulating icons of one sort or another. Okay, I am more joker than cynic, and I’ve been seduced myself, and believe strongly in the longevity of his art. But not to this extent, at these prices.

The market has accorded Guyton near royal status in recent years. Wades are flying out faster than Oscar’s tacos. Over the past two years his Xs, Us and monochromes have been climbing, in rapid succession, from $800,000 and $900,000 to $1 million and well beyond. Just when you thought it couldn’t get kookier, rumors of $2 million, then demands of $2.5 million, began circulating. Now, brace yourself: only last week, someone offered a “flaming U” at the whopping price of $5 million. That’s a market-quake registering 12 on the Richter scale.

But it’s not as simple as that. Let me digress. You may be familiar with the phrase “to gazump,” which is when someone makes a higher offer for a house after a bid has already been accepted, thus acquiring the property from beneath the nose of the original high bidder.

Unbelievably, there is now a whole other kind of game afoot in art, in which all that is needed to cause a seller to change his mind and renege on a deal is the mere acceptance of his offering price. The argument of the seller, to himself and/or his advisors, is that surely his masterpiece must be worth more. It’s the new self-gazump, and pure art-world onanism.

Back to the Wade story: en route to the St Pancras rail station in London, I received a phone call before 7 a.m. That’s rarely a good thing, but I had an especially bad feeling since I’d been Guyton-gazumped over and over this summer. Just as I suspected: the painting (and, unsurprisingly, the “friend” of the friend showing it) would perhaps not be in Paris at our previously prescribed time after all.

Whenever something is too good to be true it usually is, as was the case with the multi-X that I was to view with a price tag of $1.3 million (can you believe that?). This is art buying reduced to bagging evasive wild game: completely without joy. I went to check out of the train and head back home.

My taxi ride back was with a colorful and full-of-anecdotes driver, a fitting way to fill the bleak space after such a thwarted and aborted crack-of-dawn mission. When he was potless (translation: penniless), he said, he and his wife scrambled a fiver (a £5 note) and bet it all on a horse, only to lose. They then found out, exactly a year later to the day, that the very same horse won a different race. And I thought I had all the luck! That reminded me that the only thing worse than being behind the times is being too far ahead of them. Must happen to psychics all the time.

(Oh: the cab driver also said he was psychic. When he relayed the racing story to his skeptical friends they goaded him to do it again, and overnight he dreamt of a jumbo jet with “NZ” on the tail wing. So his friends found the only U.K. horse running in New Zealand that morning. And they won!)

Then the inevitable art conversation ensued (which in London taxis is like talking politics to a Middle Easterner), from Tate’s (annoyingly) still-controversial 1976 decision to buy a Carl Andre brick sculpture, to the Tracey Emin’s unmade bed and cadavers of Hirst, we covered all the inevitable and tedious art bases. Then, out of the blue, he blurted out something totally unusual about an Andy Warhol piss painting.

That last reference was a bit obscure, even for a London taxi driver in his early 70s, and I happen to have one of those Warhol piss paintings hanging in my bedroom, so it felt like a sign of some sort.

Will my client ever get a Guyton? I was afraid to ask the soothsaying taxi driver for a tipoff. I thought it better to avoid messing with fate or stumbling into a self-fulfilling prophecy of who-knows-what significance. As for whom the bell tolls, looks like it will be for thee before I can get my hands on one of those paintings.

I may as well stamp my application for a Wade with a big X. And to think how highly I had hoped for 80 inches on the long dimension, which I know sounds like a Groucho Marx line. But wait! An art premonition of my own from above! Tread carefully: we are approaching a highly dangerous period! In November 2013, Christie’s will offer a Wade Guyton “flaming U” painting with an estimate of $1.2 million to $1.8 million. 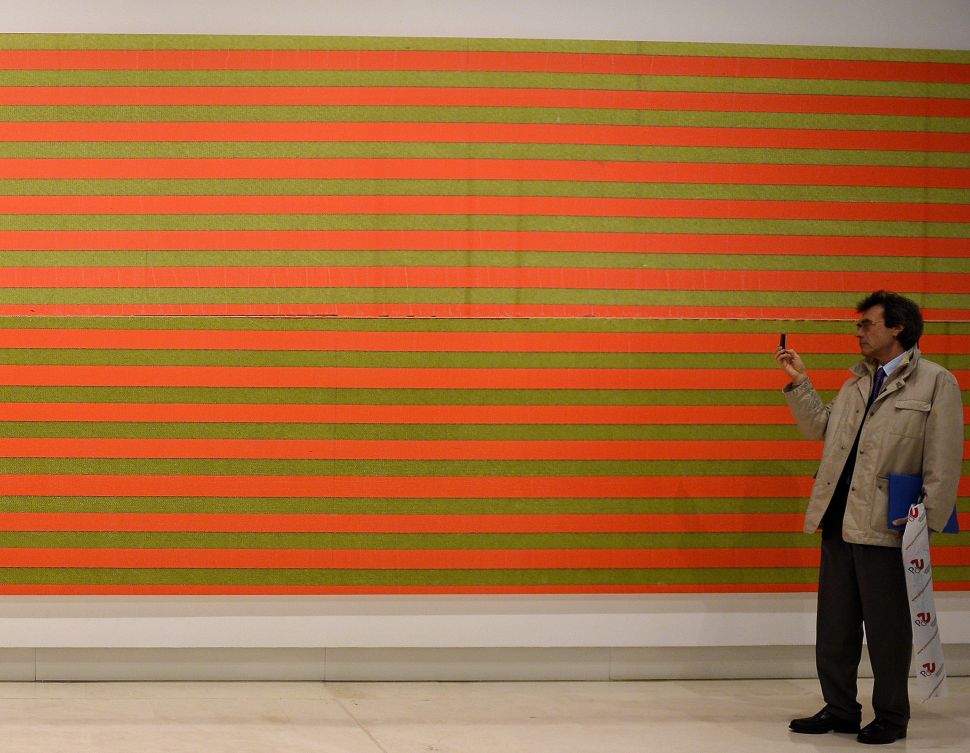