FREEHOLD – It was here in New Jersey’s Monmouth County where two of the country’s Republican governors joined one another once again on the campaign trail.

Gov. Chris Christie, the state’s favorite to win tomorrow against Democratic hopeful Sen. Barbara Buono, once again stood beside New Mexico Gov. Susana Martinez inside a GOP county headquarters packed with supporters. Martinez, who’s joining Christie for a day of campaign stops in the Garden State, was the one to last host Christie in 2010 when New Jersey’s governor joined her at a Republican headquarters in Roswell, New Mexico, during her inaugural run for governor.

“It is so important to keep New Jersey on the same track and to keep this amazing governor as your governor here in New Jersey,” Martinez declared inside Freehold’s Monmouth County GOP headquarters to cheers.

Christie campaigned in Southeast New Mexico before Martinez, a Republican in a blue state, was elected to office over her Democratic challenger. At the time, Christie offered his campaign as proof that a Republican can get elected as governor in a state where the GOP Party is outnumbered by Democrats.

Today, Martinez brought the same message to New Jersey, except this time, it was about keeping the GOP in command.

“I can’t tell you how monumental it was when he took office because everyone in the country was watching. We were waiting and watching to see what was going to happen and when he became governor of a blue state it was amazing because then we knew we could do it all over the country,” said Martinez, who’s the nation’s first Latina governor.

In 2010, it was reporters asking Christie who was in the oil-rich Southwest whether he was gearing up for a run for president. And now, the question was whether Christie – who’s widely thought to have a 2016 White House bid on his mind – would tap the New Mexican governor as a running mate.

“Is it a ticket?” asked one of the reporters from the press corps.

“No, she doesn’t live in New Jersey,” Christie said with a smile and to laughs from Martinez. “So, we can’t run together and I can’t run in New Mexico, so we’re working hard together today [and] we’ll work together tomorrow.”

Christie told reporters Martinez was simply passing along the favor after he campaigned for her.

“Three years ago I worked with Gov. Martinez to get her elected. We’re both former prosecutors, red governors in blue states and we speak the same language,” Christie said. 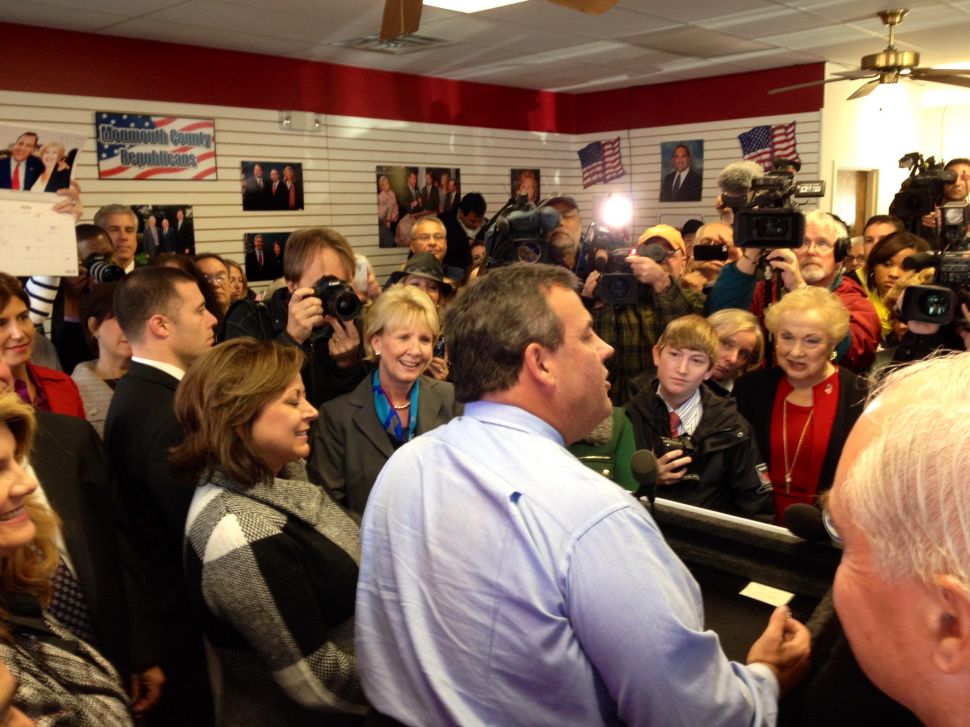