Most of us—artists and otherwise—struggle to be great at one thing. Ad Reinhardt excelled in at least three pursuits—painting, illustration and photography—as this thrilling show makes plain. (He was also a stellar polemicist.) A vital and iconoclastic member of the midcentury New York School, Reinhardt followed a Mondrian-like path over his too-short career, freeing his art of figuration and, eventually, mark-making altogether. He is best known today for his final works, the so-called black paintings, which he focused on from 1954 until his death of a heart attack in 1967, at age 53.

The black paintings, arrayed around one gallery, are not quite black. To make them, Reinhardt added tiny amounts of red, blue and green to black paint and then let the mixtures stand so that pigment and solvent would separate. He applied the raw pigment to these 5-feet-square canvases in a nine-part grid, wiping away brush marks as he worked to leave matte planes. Former Museum of Modern Art Chief Curator Robert Storr, in collaboration with the artist’s estate, sourced 13 black paintings from public and private collections—reportedly the largest number ever assembled—for this exhibition. (Nothing in the show is for sale.) They disclose their minute color gradations over long periods of time and repeated visits. “Art is art-as-art, and everything else is everything else,” Reinhardt famously wrote of his outlook, and his black paintings exemplify that position, an ostensibly austere philosophy that pays outsize dividends to committed viewers. 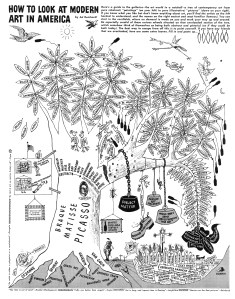 ‘How to Look at Modern Art in America,’ 1946, by Reinhardt. (Courtesy David Zwirner)

His paintings may ward off the noise of the world, but Reinhardt was fully immersed in it as a witty and prodigious cartoonist and an adventurous travel photographer. He helped pay the bills by churning out political cartoons for the left-wing tabloid P.M. and others throughout the 1930s and World War II, lampooning everyone from Hitler (who often appears as a cartoon devil) to Churchill and American politicians. He also produced more than two-dozen cartoon pages in a deliriously funny series called “How to Look” that sought to educate the public about modern art while taking the piss out of critics, philistines and fellow artists. (Zwirner has published them in a book.) One panel offers perhaps the best defense of modern art on record: a googly-eyed man mocks an abstract painting, “Ha, ha, what does this represent?” only to have the work shout back, finger pointing, “What do you represent?”

What does Reinhardt represent? Shortly after the artist died, the conservative critic Hilton Kramer called him, with all-too-delicious irony, “an intransigent suspected of being a crank.” Mr. Storr’s show confirms just the opposite. Reinhardt was a devotee of high-modern abstraction, sure, but he was also a broadly curious and playful thinker and educator, as evidenced by those urbane cartoons and the countless photographs that he shot at art-historical sites around the world and would project in relentless lectures, some with more than 1,000 photos. (They’re on view as a short slide show, which the artist’s daughter, Anna, will be supplementing throughout the exhibition’s run.)

I’m with Sinclair Lewis, who once wrote to Reinhardt to share his admiration for his cartoons, “Your missionary zeal is so tempered with good nature and humanness that it is a delight.” Reinhardt was a rare type. His great contribution to high art—his mysterious canvases—became a linchpin for Minimalism, but it’s his total artistic personality that invigorates today: perspicacious and always ready to bowl someone over, with a new painting or a pointed joke. (Through Dec. 18)