The inauguration of the fall gala season hits New York like a force of nature. It’s a furious sprint for gowns, coveted caterers, gilded event spaces and access to wealthy denizens’ purses. “I’m a size zero—way below the average size of most of these ladies who lunch—and I still can’t snatch my first pick at Oscar or McQueen,” bemoaned one outspoken Uptowner. “I paid a fortune to preorder an Elie Saab gown.”

For Shindigger, the season ushers in a refreshing touch of class, not to mention a seemingly endless stream of Champagne and red wine. At last week’s gala for opera singer Martina Arroyo’s foundation, held at 583 Park Avenue, outfits were dark and glittery, jewelry was dangerously flamboyant, and the hairdos around table No. 12 were voluminous.

Eventually, we raised our glasses to the evening’s boldface honoree, Tony winner and six-time Emmy recipient Tyne Daly, as legendary playwright Terrence McNally took the stage as a presenter.

“Like a composer, a playwright depends on an interpreter who presents himself or herself to the world,” Mr. McNally said. “Without that, we are scribbling on a piece of paper—words and notes waiting to be released into the ionosphere.”

He abruptly stopped and gave a confused look. “I’m sorry. I should have worn my glasses,” he said, as the audience began to giggle. “This is my own handwriting, which is lousy. The printer was broken!”

As the laughter died down, Mr. McNally began to praise Ms. Daly, who starred in his lauded 2011 play Master Class about Maria Callas. He also revealed that he is writing a new play for the actress.

“I’m glad we’re honoring a woman who gives back to the arts more than she has ever taken,” he said. “Like Madame Arroyo, well, Martina—Madame Butterball herself …”

There were gasps and nervous snickers before he finally ceded the stage.

“I can’t have too many of these. I love getting prizes,” Ms. Daly said, as she took her award. “I have mixed feelings about young artists,” she continued. “Mostly they piss me off.”

In the end, her tune took a more serious turn. “These young people are trying for something beautiful,” she said. “And I am in admiration for that.”

Last Wednesday, Shindigger headed to Cipriani 42nd Street for the 2013 Phoenix House Fashion Awards. The evening, emceed by Alina Cho, benefited youth who lack insurance or the ability to pay for addiction treatment.

Perhaps understandably, Shindigger found attendees a bit hesitant to imbibe copious amounts of alcohol during a substance-abuse benefit, but such uneasiness quickly dissipated as the soirée was soon classified as “cautiously tipsy.”

The real crowd-pleaser was Mr. Lauder. “It’s great to be in this great bank with you tonight. If you rub up against money long enough and hard enough, some of it will rub off on you,” he snarked, before giving a shout-out to his fiancée, Linda E. Johnson, who is nearly 30 years his junior. That drew some whispers—perhaps due to the buzz surrounding the power pair’s “postponement” of their August wedding.

After polishing off our red wine, Shindigger skipped dessert, as per usual, and tiptoed over to a fête for Paramount’s feature film Nebraska. Moviemakers and their envoys mingled furiously around the modern Midtown eatery Brasserie 8 1/2.

“The Côtes du Rhône is flying off the bar tonight,” one server told Shindigger.

“We’re sure not helping!” we responded, helping ourselves to a refill.

The black-and-white movie follows a crabby man named Woody Grant (Bruce Dern), who is deceived by a sweepstakes letter and drags his son (Will Forte) on a road trip to collect his winnings. Directed by two-time Oscar winner Alexander Payne, the film has already been nominated for the Palme d’Or at Cannes and is a strong Academy Award contender.

“I was surprised that they let me be in it!” admitted Mr. Forte, who looked smashing in a Simon Spurr suit. “It’s so rare that you’ll read something that’s so wonderful and then the production process is every bit as wonderful or even better. How can you not trust Alexander Payne? He’s amazing.”

The movie was filmed in four states: Montana, Wyoming, South Dakota and, of course, Nebraska.

“They were all wonderful,” the former SNL cast member said. “We got to know the people there. They took us under their wings. Nebraska was my favorite.”

Shindigger wanted to know what the comedian and actor would do with lottery earnings if he were ever to hit the jackpot.

“I would buy Bruce a pair of nose hair trimmers,” he jested. “Or I would make a fund for my nieces and nephew. Then if I had kids, I’d take it all away from them, and I would give it to my kids.”

He searched for a serious response.

“You would think that I would have a better answer,” he shrugged, before adding: “I would definitely give to charity.” 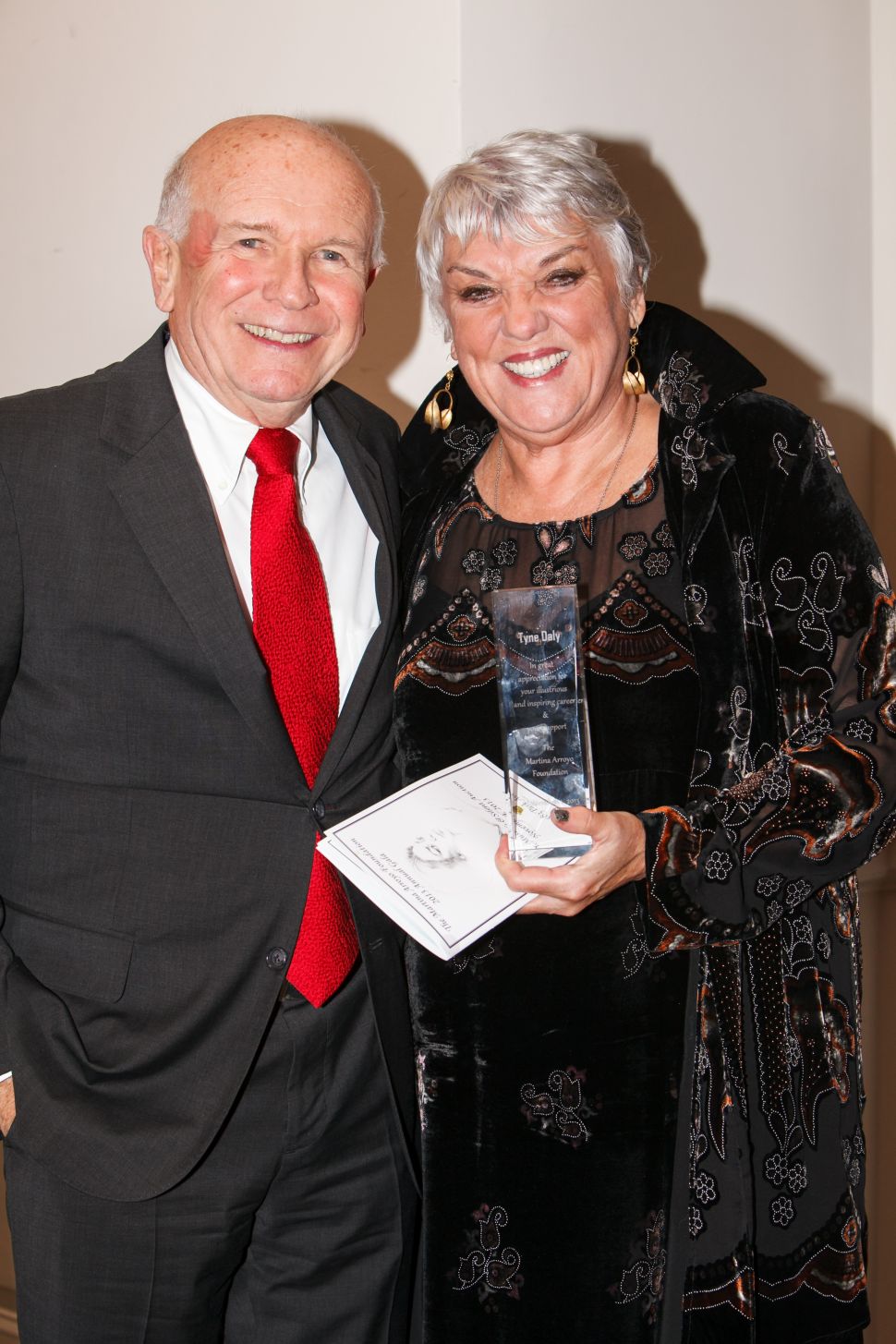