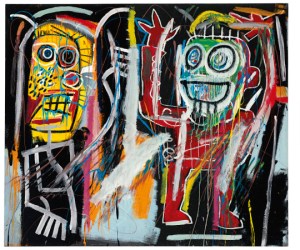 Jean-Michel Basquiat’s sisters, Lisane and Jeanine, are taking the Internal Revenue Service to court, claiming that it overvalued their brother’s estate, DNAinfo reports. The siblings are pursuing a suit filed by their father, Gerard Basquiat, in May, a few months before his death in July. The late artist’s estate includes over 1,300 of his drawings and paintings as well as 36 works by other artists, including Andy Warhol.

The legal dispute arose after Basquiat’s mother, Mathilda, died in 2008 and her half of the estate was divided between Gerard, Lisane and Jeanine. In 2010, Gerard paid $8.5 million in death taxes for Mathilda after Sotheby’s appraised her half of the estate, valuing it at $36 million. Later, however, an IRS audit determined the estate to be worth $138 million, putting Matilda’s half at $69 million, which meant her family owed an additional $7.3 million in death taxes. The lawsuit filed by Gerard claims that the IRS neglected to incorporate a blockage discount—essentially a value decrease on the assumption that selling everything at once would flood the market—of $58.4 million in its calculations, which would reduce the value of the art collection component of the estate from $127 million to $72 million. The case will appear before the United States Tax Court in April 2014.