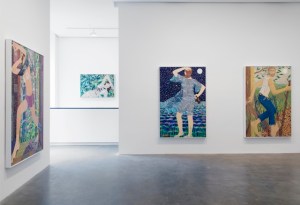 A young woman, in Benjamin Degen’s large oil painting Sea, stands looking out into a pink tide by moonlight. She fills the universe: Her left hand, resting on top of her long brown hair, touches the top of the frame; her pointy right elbow, above an open brown bottle of Brooklyn Lager, meets the right edge; the hem of her patterned blue sundress, too translucent to do more than tint her white bikini, swings against the left; and her feet, surrounded by tall, seaweed-like grass, rest firmly on the ground. Mr. Degen lays down paint like sculpture, multiplying little ridges into patterns that carry as much formal weight as their rich, sartorial colors. The leaves of grass poking this ocean gazer’s ankles are like plastic lanyards, a section of her dress seen against the sky is a stickiness as intricate as natto, and even the beer bottle is a psychedelic network of dashes. Red rays emanating from blank white circles and blue rays painted over the red are almost entirely covered with discrete indigo ridges to make the densely starry night sky. But this primordially mythic girlfriend is both more and less than human: Her limbs, too, pulse with lines of separate color, but her shape is stylized, and her skin is completely flat.

This vision of humanity as the conjunction of cosmic forces and blindly self-replicating patterns, as well as the paintings’ pretty ugliness and their strangely mathematical spiritualism—their demonstration that extremely simple gestures, repeated in high enough numbers, produce unexpected subtleties—reaches a peak in the 4-by-6-foot oil painting Men. Three translucent figures, blue, yellow-green and purple, as well as arms and legs from a brown and paler blue figure running in and out of frame, overlap one another and a multitude of branches against another extraordinarily starry sky. The trees are like arteries, the stars are like freckles, and every overlap produces a new color. (Through Dec. 7) 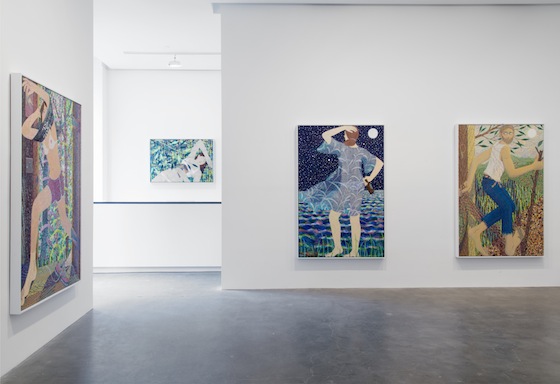